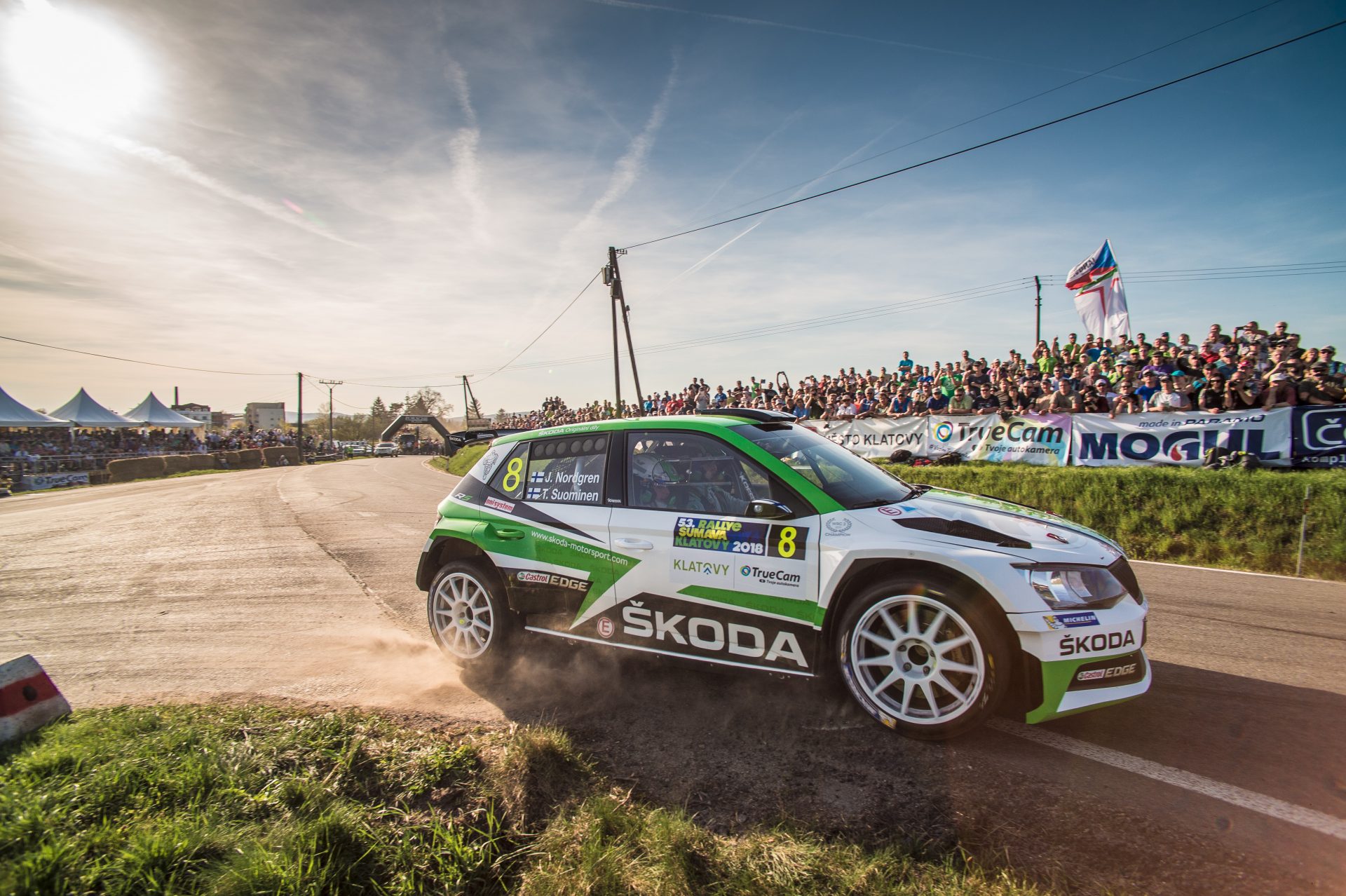 Rally Šumava is On: Both FABIA R5s on the Podium! Kopecký 1st, Nordgren 3rd

This morning, Rallye Šumava Klatovy, the second round of the Czech Rally Championship, started with a 3.15 km long shakedown. Jan Kopecký, driving a FABIA R5 in the Czech national colours, posted the fastest time of 1:28.5 and won the shakedown, followed by the current European Rally Championship leader Alexey Lukyanuk in his Ford Fiesta R5.

The ŠKODA factory team’s second driver, youngsterJuuso Nordgren from Finland, finished in fifth place – a decent result, considering this is only the second tarmac rally of his career. “I feel good in the car, everything looks fine and I am eager to drive on these nice tarmac stages”, said Nordgren about his experience.

In the first stage, which started shortly after 3 P.M. from the historic centre of Klatovy, Jan Kopecký took the lead with a time of 6:20.6, almost 5 seconds ahead of Alexey Lukyanuk. Five of the ten leading cars are currently FABIA R5s.

The second stage brought no surprises. Jan Kopecký kept his lead of more than 5 seconds. Nordgren, still learning to cope on tarmac, was having a harder time but remained in the first ten overall.

With all three afternoon stages behind us, Kopecký was still in the lead, having increased the gap to 11.9 seconds. Juuso Nordgren finished 6th in Stage 3 and moved up to 9th place in the overall standings. There was a service break before the night stages began.

The fourth stage of the day brought no changes in the lead, with Kopecký keeping first place and increasing his lead to more than 15 seconds. Nordgren had a great run, finishing 5th and moving up to 6th place overall.

Juuso Nordgren continued to move up the rankings and remained in 6th place overall. Jan Kopecký maintained his clean record and stayed in the leading position!

Juuso Nordgren finally found his pace and posted the fastest time of Stage 7, 4:56.5. Kopecký was 2 seconds slower and ended up 3rd in the stage. Overall, he retained the lead, while Nordgren moved up to fourth.

In the second stage of the day, Jan Kopecký finished with the 2nd best time, followed by Juuso Nordgren in 3rd. Kopecký kept the lead, 35.5 seconds faster than Lukyanuk in second place, while Nordgren was catching up in 4th. Mareš, Štajf and Tarabus in customer Fabias were also in the top 10.

The results of Saturday’s third stage reflected the overall standings. Jan Kopecký won the stage and remained in the lead while Nordgren finished 4th, making him 4th overall.

The last stage of the “morning” part of Rallye Šumava ended without surprises. Jan Kopecký once again posted the best time and still led the rally, while Nordgren placed second in the stage and remained fourth overall.

After the service break, both factory crews returned in great form. Kopecký scored another stage victory, while Nordgren finished right behind him. Overall standings remained unchanged, with Kopecký still 1st and Nordgren 4th.

The second stage of the afternoon brought no significant change. With Kopecký finishing second and Nordgren 4th, the overall standings stayed as they were.

Juuso Nordgren aims for the podium! After finishing third in the penultimate stage, Nordgren was also in 3rd place overall. Kopecký stayed in the lead, almost a full minute ahead of the pack.

The final stage of Rally Šumava Klatovy cemented the dominance of the factory crews. Although he finished 3rd in the stage, Jan Kopecký retained his comfortable lead, while Juuso Nordgren finished second and secured overall 3rd place. We congratulate both drivers!

Next week, our factory crews are going to Argentina!