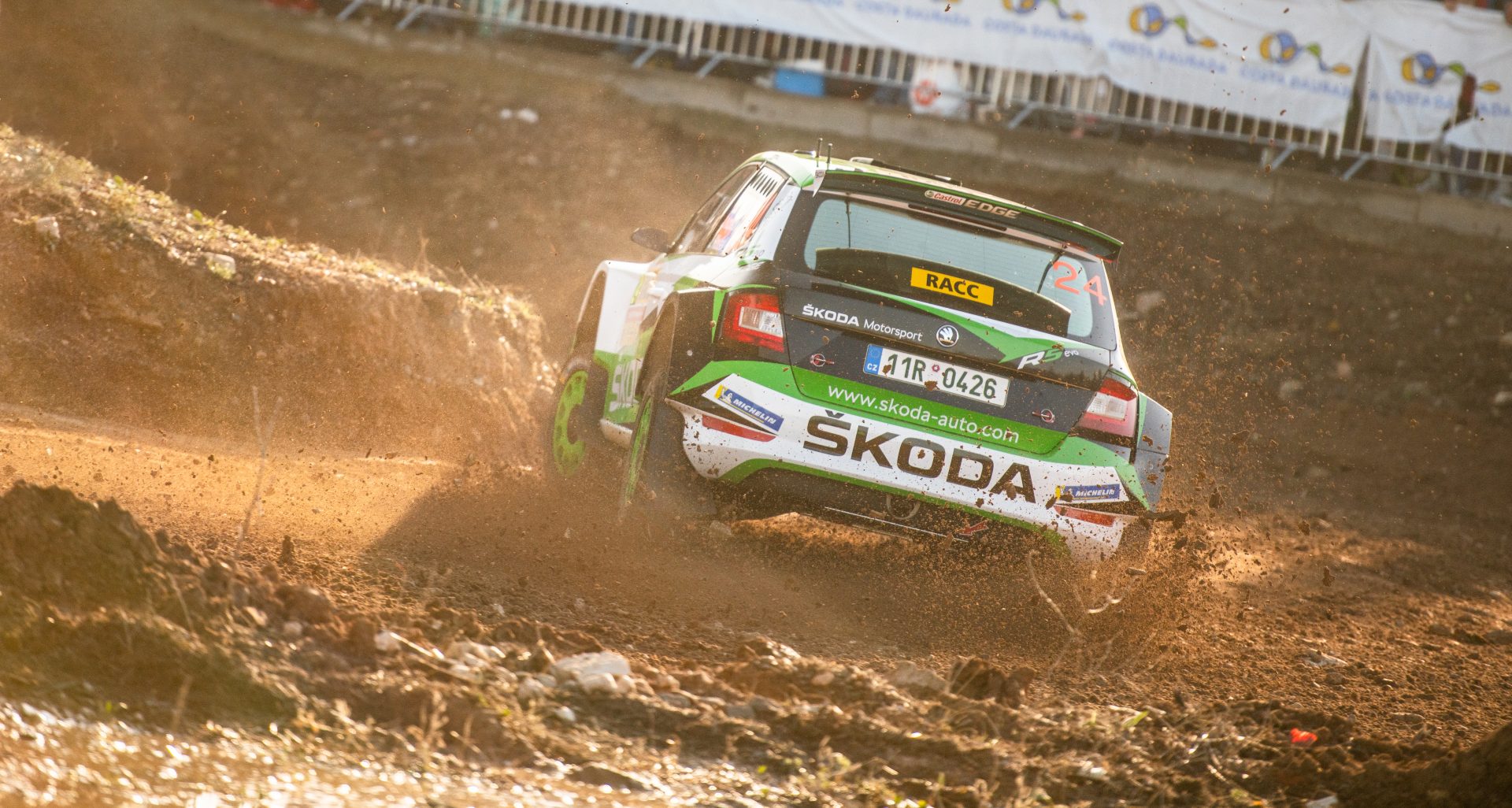 The penultimate round of the WRC calendar once again takes the crews to the beautiful coast of Catalunya and it seems that the nature will be kind to this rally. Just a day before its start, the torrential rains, which caused massive floods in the area, stopped and were replaced with blue skies and nice temperatures around 20 °C. Even so, the organizers had to put some work into making the tracks ready for the competition. Like in Wales the earlier this month, ŠKODA Motorsport fields two cars, one driven by Finnish duo of Kalle Rovanperä and Jonne Halttunen, the other with the Czech crew of Jan Kopecký and Jan Hloušek.

Like in previous years, the crews, engineers and mechanics will face a specific challenge on this rally, as its first leg is run on the gravel, while the other two take place on tarmac. This makes finding the right setup very demanding, and it’s also hard on both tyres and the crews’ ability to focus. Read more about the challenges and the programme of the RallyRACC Catalunya in our preview.

The only items of the Thursday’s programme are the morning’s shakedown and the ceremonial start in the evening. During the shakedown, ŠKODA Motorsport crews weren’t taking unnecessary risks, but even so, Kalle Rovanperä took the best time in WRC 2 Pro, followed by Jan Kopecký. Their traditional rival Mads Ostberg on Citroën was about a second faster, Gus Greensmith with a Ford was fourth. Still, there times don’t have much of a real meaning and the real rally starts on Friday morning. And as previous years have shown, we can expect a tight battle.

The Friday morning brought much anticipated battles on the three dusty stages, Gandesa, Horta-Bot and La Fatarella – Vilalba. In the WRC 2 category, Pierre-Louis Loubet was the most successful ŠKODA FABIA R5 driver, starting the day with the fourth-best time, then moving up to the second place and finally taking the lead in almost 40-kilometre-long La Fatarella, finishing the morning 8 seconds ahead of the runner-up Christian Veiby on Volkswagen Polo GTI R5.

In the afternoon’s second runs of the Friday’s stages, the tight battle in WRC 2 category continued. Pierre-Louis Loubet on ŠKODA FABIA R5 evo managed to keep his lead for the whole afternoon, although Eric Camilli with his Citroën C3 R5 was chasing him. First, he managed to get in front of Veiby, and then he diminished the gap behind the leading Frenchman to just 1.5 seconds.

In WRC 2 Pro, not much has changed, except for Ostberg increasing his lead to the rest of the field – the runner-up Rovanperä, Kopecký in third and Greensmith in fourth. The Finnish ŠKODA Motorsport works driver wasn’t very happy with the result, but he’s planning to improve his reputation on Saturday. “I hope it will be better on tarmac because today was really bad. I was pushing more in the afternoon but the tyres were worse than in the first loop”, said Rovanperä.

After shaky gravel Friday, the ŠKODA Motorsport crews apparently took Kalle’s words to their hearts. Right in the first tarmac stage Savalla, the experienced crew of Jan Kopecký and Jan Hloušek posted the best time in the RC2 class. Their teammates Kalle Rovanperä and Jonne Halttunen ended up just 0.6 seconds behind them. In the following stage, Querol, it was Rovanperä who finished first, with Kopecký in the third place. In the Saturday’s third stage, Montmell, they once again traded places – Kopecký was the fastest, while the Finns placed third. During the morning run, Kalle and Jonne managed to close the gap to Mads Ostberg, who leads the WRC 2 Pro category, roughly by half to 22.5 seconds. Jan Kopecký and Jan Hloušek moved up three places in the class.

In WRC 2, there was a change in the leading positions. Pierre-Louis Loubet didn’t keep his lead and Eric Camili got 14.5 seconds ahead of him during the morning’s three stages.

In the afternoon, ŠKODA Motorsport crews continued in their pursuit. Rovanperä posted two fastest time in the second runs of the morning’s stages, while Kopecký collected two second-best and one third-best times. This was enough for the Finnish crew to decrease Ostberg’s lead under ten minutes and move to the third place in the class with good chance for victory.

However, the super special stage in Salou put an unexpected twist to the story, even though it’s usually considered to be a formality. Rally is an unpredictable sport where nothing is ever given. On the two-kilometre circuit, crowded by fans, Kalle spun out, broke the wheel and lost 45.5 seconds. This moved Kopecký to the second place in WRC 2 Pro, behind Ostberg, and to the third place in RC2 class. He will have to fight hard to have any chance to catch up on the Norwegian in Sunday’s four stages.

On Sunday, Jan Kopecký continued to prove his great pace, when he won the first stage, Riudecanyes, with its famous roundabout traditionally crowded by thousands of fans. In the following three stages, the ŠKODA Motorsport works crew continued posting good times and cemented its second place in the WRC 2 Pro category. “Our main goal was to finish the rally. I want to thank the whole team and also Jan, who did a great job”, Kopecký praised his new co-dirver Jan Hloušek, with whom he first appeared in Wales.

This years WRC 2 Pro champions* Kalle Rovanperä and Jonne Halttunen also decided not to try the impossible and focused on successfully finishing the rally. This benefited the spectators as well, as the Finnish duo did an additional lap of the roundabout, greeting the fans with waving and clouds of tyre smoke.

The second and third place in the WRC 2 Pro also decided that in Spain, ŠKODA Motorsport managed once again to win the manufacturers’s championship title*. It is a great achievement not only for the team, but also for the revamped ŠKODA FABIA R5 evo rally car, with which ŠKODA Motorsport managed to claim three double victories (Portugal, Sardinia and Wales), two victories (Finland, Germany) and two second places (Turkey, Spain).

“Finally, I can say: mission accomplished. We achieved every target we set ourselves for 2019. We successfully brought the new ŠKODA FABIA R5 evo to the market, Kalle and Jonne took the drivers titles and on top of that, together with both Jans, secured the necessary points to win the manufacturers’ championship”, ŠKODA Motorsport director Michal Hrabánek emphasized.

* subject to the publication of the official results by the FIA