There was a ŠKODA’s One-Two at the Kocaeli Rallisi (11-12 November), the final round of the Turkish Rally Championship, as new champion Burak Çukurova claimed his third win of the season to wrap up a successful year.

Çukurova, who was driving alongside co-driver Vedat Bostanci for the BC Vision Motorsport in a ŠKODA FABIA R5 prepared and run by Topp-Cars Rallye Team, had already clinched the Turkish title at the previous round, the Marmaris Rally, and so came into this event in relaxed mood.

And it showed as he put in a hugely dominant drive. Across eight stages and 96.3 kilometres of rallying, Çukurova finished a huge 5 minutes and 46 seconds ahead of his closest rival. He ended the season with three wins and finished on the podium in all seven rounds of the championship. 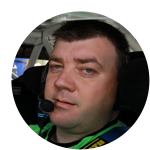 “After winning the championship in Marmaris, our goal in the last round was winning the rally without any stress,” explained a satisfied Burak Çukurova at the finish. “Our car was perfect in this rally too and with this performance we continued our good form. We completed the season winning the 2017 drivers, co-drivers and teams championships, so we have to be satisfied with that.”

It was the Toksport WRT FABIA R5 of Uğur Soylu / Mehmet Köleoğlu who finished in second place. They were actually leading at the end of the first leg, but a flat tyre on the opening stage of the second leg cost them more than six minutes and with it a chance of the victory.

But they still managed to claim second place by a comfortable margin of 1 minute and 35 seconds from the third placed car and those points ensured they would also finish second in the overall Turkish Rally Championship standings too.

The Rally Carapeguá (10-12 November) was the eighth and final round of the Paraguayan Rally Championship and saw a remarkable five FABIA R5s finish inside the top 7 in a thrilling end to the season.

Gustavo Saba had already wrapped up the championship title at the Transchaco Rally in the previous round and he took another victory here, his fifth in the Paraguayan championship classification of the season. Driving alongside regular Argentinian co-driver Fernando Mussano for his own Saba Competición team, he finished 37.4 seconds ahead of the field.

The next FABIA R5 home was that of Miguel "Miki" Zaldivar / Edgardo Galindo. They ended up in third place overall to secure a fifth podium finish of the season. Having also won the opening round of the season, the Rally del Guairá, they ended the season in second place in the overall championship standings.

Just 10.6 seconds behind Zaldivar Sr in fourth place overall was the FABIA R5 of Didier Arias / Hector Nunes. They have had another strong season, claiming a great victory at the Transchaco Rally last month and two other podium finishes. Tiago Weiler / Diego Cagnotti finished in fifth position. They too have impressed at times this season, finishing in the top 5 on four occasions and also claiming a fine victory at the Rally del Alto Paraná, the fifth round of the championship. And last, but by no means least, was the FABIA R5 of Blas Zapag / Enrique Fratta in seventh place overall. Zapag has endured a long run of bad luck this year, and this is the first event of the year which he has managed to finish, so he will no doubt be pleased to end the season on a positive note.

Our roundup this week begins with the French Cup and the Rallye National Mare e Machja (11-12 November), where Jean-Matthieu Leandri / Anthony Gorguilo claimed an emphatic victory by a margin of 2 minutes and 22 seconds. Leandri was driving a FABIA R5 prepared and run by Team FJ and this was his second French Cup victory of the season after the Rallye National Côte des Nacres - Costa Serena in April.

There was more FABIA R5 success at another French Cup event, the Rallye Régional du Haut-Pays Niçois (11 November), where Nicolas Vouilloz / Franck Lions took victory by a narrow 1.5 seconds. Vouilloz, who is a former French tarmac (2006) and Intercontinental Rally Challenge (2008) champion, was driving a car prepared and run by Rally Service Racing. He has only driven occasional rallies since 2010 and this was his first ever drive in a FABIA R5 and only his second event of the year. Meanwhile, Stéphane Richelmi / Romain Haut-Labourdette finished in third place, just 22 seconds behind the winners in a FABIA R5 prepared and run by Roger Tuning.  Richelmi is a successful racing driver who in 2016 won the FIA World Endurance Championship (WEC) as well as 24 Hours of Le Mans in LMP2 class. This was his first ever rally.

To Austria, where the Rallye Waldviertel (10-11 November) was the seventh and final round of the Austrian Rally Championship. Christian Schuberth-Mrlik / Ilka Minor-Petrasko were the fastest of the R5 competitors for the Bezirksblätter Racing Team, in a FABIA R5 prepared and run by Baumschlager Rallye & Racing team. They finished in fourth position overall. The three fastest R5 spec cars were all FABIA R5s, with  Dávid Botka / Márk Mesterházi finishing just 8.1 seconds behind Schuberth-Mrlik in fifth overall for the Botka Rallye Team, while the Extrém Sport Team Kft FABIA R5 of József Trencsényi / Gábor Verba finished in seventh place.

In Slovakia, the Autoshow Slovakiaring (11-12 November), which was held at the Slovakiaring racing circuit, saw a victory for Grzegorz Grzyb / Michał Poradzisz. The Polish duo was driving for the Rufa Sport team in a FABIA R5 prepared and run by MM Rally Team and finished 8.2 seconds ahead of the pack in this 3-stage event. Martin Koči / Michal Koči finished in third place for the Styllex Motorsport team, just 10.2 seconds behind Grzyb. Further down the field, the Drotár Autošport FABIA R5 of Igor Drotár / Jakub Varga finished in fifth place and Rufa Sport’s Tomasz Wróblewski / Radosław Banach finished in eighth position.