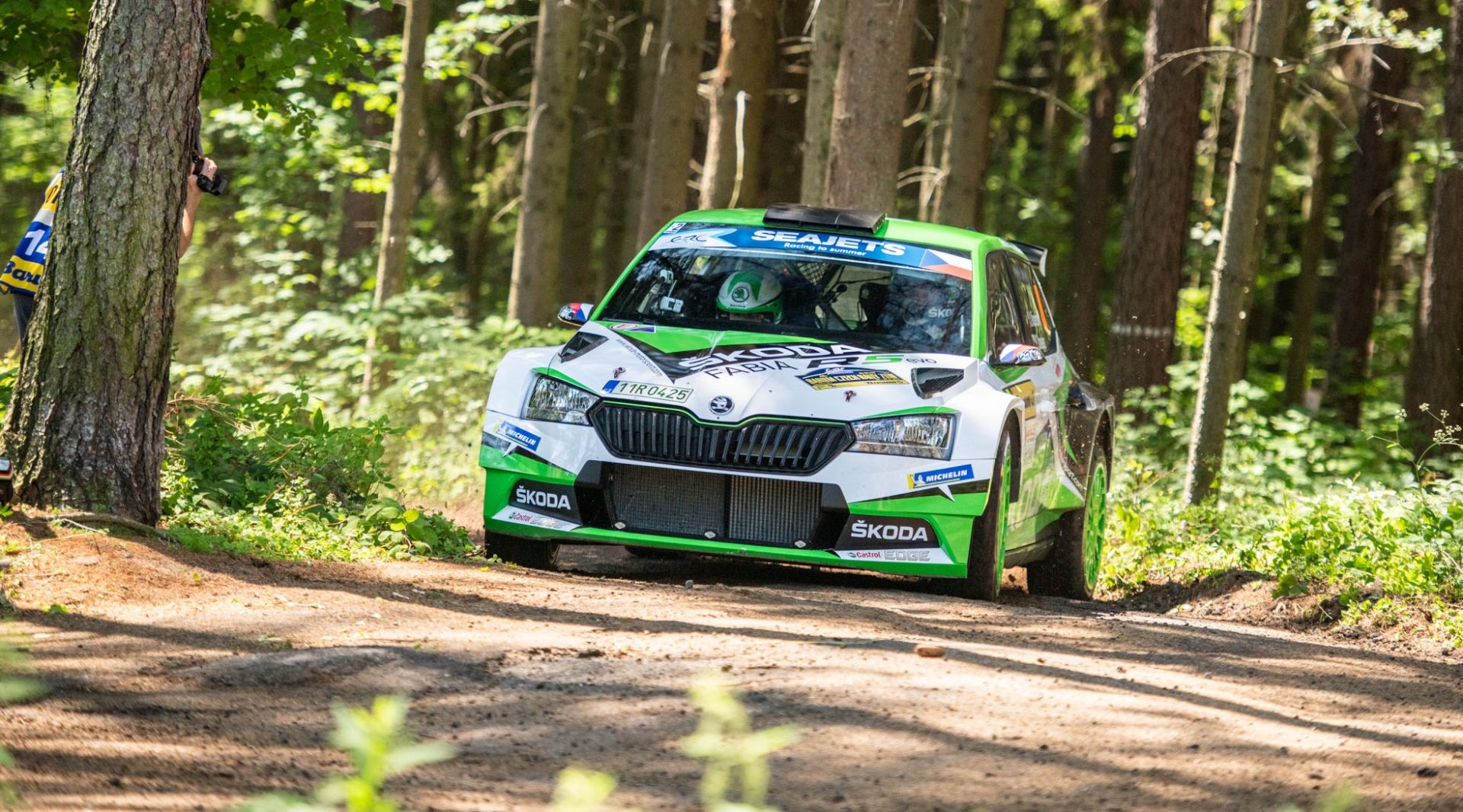 Of all the Czech rallies, Barum is by far the most renowned internationally. It’s a part of the European Rally Championship and it regularly draws some of the best crews in Europe. Thanks to its high rating, it was even considered for World Rally Championship – you can read more about its history in our summary.

The top contenders for victory are, as usual, Jan Kopecký and Pavel Dresler from ŠKODA Motorsport works team, who dominated the rally in last four years. This time, they are coming with the improved FABIA R5 evo, as are four other crews. Overall, almost 40 ŠKODA cars from different eras will appear on the starting line – besides more than 20 FABIA R5s, the older cars such as FABIA S2000 or ŠKODA 130 LR will take on the stages.

Barum Czech Rally Zlín attracted more than 120 crews, so the last cars went through the evening’s super special stage in Zlín just before midnight. At first, Nikolay Gryazin and Alexey Lukyanyuk posted great times, with over three seconds to the rest of the field. Then, Jan Kopecký proved his dominance when he beat their performance by another four seconds and took the lead.

The first part of the Saturday’s leg brought an exciting and very tight battle of Kopecký, Gryazin and Lukyanuk. In the first special stage, Březová, they all posted times within 0.7 seconds and in the next three stages, each driver celebrated one victory. First, Gryazin took the lead 3.9 seconds ahead of Lukyanuk. Then, it was Lukyanuk who moved to the top with a lead of almost 4 seconds. Finally, it was Kopecký who managed to finish 3.3 seconds ahead of the Russian driver. Unfortunately, Gryazin had to change a wheel and collected two minute loss. Before the second part of the Saturday’s leg, Jan Kopecký and Pavel Dresler are in the second place, just 0.4 seconds behind Alexey Lukyanuk with co-driver Alexey Arnautov. Chris Ingram in the third place is loosing 33.4 seconds.

In the afternoon’s four stages, Kopecký managed to post two best times and placed second in the other two. Like Gryazin in the morning, Lukyanuk received his share of bad luck, when he suffered a puncture in the SS8 Halenkovice. The second day of Barum Czech Rally Zlín concluded with Jan Kopecký and Pavel Dresler in the first place, 57.4 seconds ahead of Chris Ingram and Ross Whittock. Filip Mareš and his co-driver Jan Hloušek are third, completing the 1-2-3 of ŠKODA FABIA R5.

With safe lead from the day before, Jan Kopecký could focus on driving the last leg in a clean way, without unnecessary risk. Still, he won two out of Sunday’s six special stages and finished second in all the others, just a couple of seconds behind the winner. In the end, he took his fifth victory of Barum Rally in a row with the lead of over a minute and a half. Overall, the FABIA R5 and FABIA R5 evo crews took nine out of ten first places.

Meanwhile, a riveting battle was fought for the second place, between Chris Ingram and Filip Mareš, both driving FABIA R5s. Mareš managed to reduce Ingram’s several seconds of lead to just 1.3 seconds three stages before the finish. In the next special stage, he moved to the second place behind Kopecký. However, in the penultimate stage, the famous Pindula, the British driver managed to get his silver position back, with a lead of 0.6 second. The decision was to be made in the last stage, 25-kilometre-long Kašava. In the end, Filip Mareš with his co-driver Jan Hloušek finished second on Barum Czech Rally Zlín, just 0.3 seconds ahead of Chris Ingram and Ross Whittock.