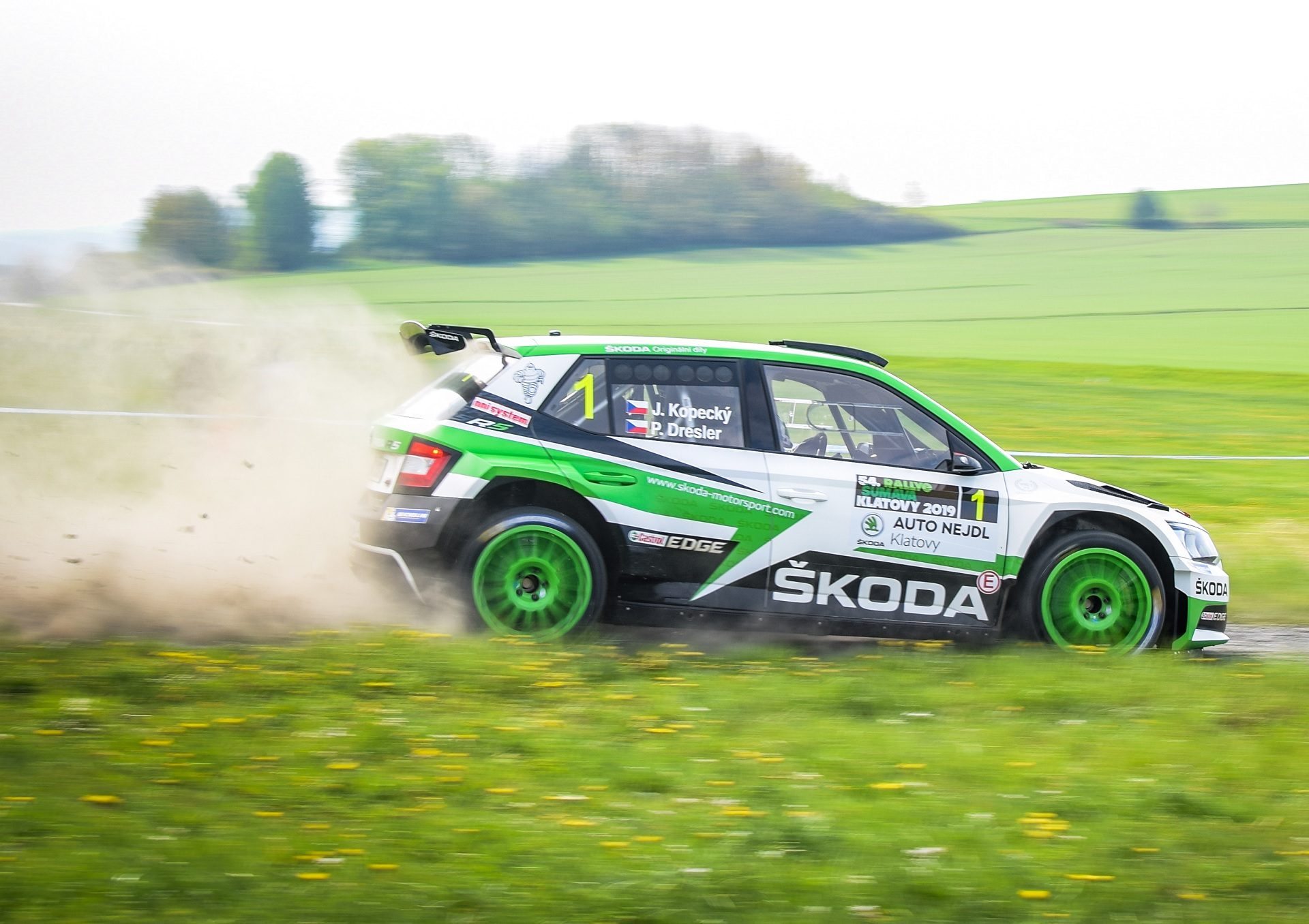 Unfortunate puncture ended a five-year winning streak of Jan Kopecký and his co-driver Pavel Dresler in Czech Rally Championship. ŠKODA Motorsport works team returns from the 54th Rally Šumava Klatovy with second place, just 12.7 seconds behind the winning crew of Václav Pech and Petr Uhel. Kopecký and Dresler vacated the top position after unbelievable 23 victories in a row. The added drama was welcomed by spectators, who breathlessly watched the battle for victory until the last stage. It was a great follow-up of the thrilling first leg, which was made challenging by unpredictable weather (similar to Rally Argentina).

Friday’s weather forecast promised local showers in various parts of Šumava’s foothills. Such uncertainty is not ideal when it comes to selecting the tyres. While the first two stages took place on the wet roads, in the remainder of the day, the surface was mostly wet with a few dry sections. Especially in the second runs, the right choice of tyres was crucial.

Jan Kopecký and Pavel Dresler placed their bet on deeply cut dry tyres with soft compound and softer sidewalls compared to the wet tyres. This makes them more durable on rough, patchy tarmac of Šumava. According to Kopecký, these tyres were getting a little hot in the dry sections, but they worked great in the wet. In the second run of Koráb special stage, which was mostly dry, the works crew managed to gain almost 20 second lead. The first leg finished on late Friday evening with Kopecký and Dresler comfortably ahead (46.1 seconds) of Pech and Uhel.

On Saturday morning, no one would doubt that the lead of green-and-white works ŠKODA FABIA R5 will increase during the Leg 2. Everything changed in Strašínská special stage. Right in the beginning of 19.29 long test, Kopecký suffered a puncture.

Shortly after start of eighth special stage, we had a puncture. I don’t know where and how, but a hole appeared in the tread and the tyre started to lose air pressure quickly. It was a long way to the stage’s finish and we didn’t want to risk damaging the car, especially the brakes. We stopped and changed the tyre right on the stage. It took us some 90 seconds, but there was nothing else to do. We’ve lost some more time driving carefully on the cold tyre for a couple of kilometres, before it got to a proper temperature. This put us to the fourth place”, told us Jan Kopecký about his unfortunate Saturday morning. As Jan Dresler mentioned, it is possible to change the tyre itself quicker, but putting the damaged wheel back in the car and securing it takes some time as well.

Back to the top

The comfortable lead in the beginning of SS9 change into the 43.3 loss to the leading car. Kopecký and Dresler begun their pursuit, cheered on by the crowds. They won the next five stages by a great margin, moving up to the second place. The lead of Pech and Uhel diminished to just 16.5 seconds before the last stage. Still, Václav Pech managed to keep the lead on his home turf, wining the rally 12.7 seconds ahead of the works crew.

Even so, Kopecký and Dresler were satisfied with the result: “Václav was really quick today and deserved his victory. He had bad luck with tyre choice on Friday, we suffered a puncture today. That’s how it is in rallying and we are glad that the fans enjoyed it as much as we did”, said Kopecký at the finish in Klatova.

Other ŠKODA crews also successfully completed the 170 kilometres of rough roads in Šumava, complete with night driving in the Friday’s leg. The crew Mareš – Hloušek celebrated the third place, with Kopáček – Rendlová nehind them and Černý – Podhorský finishing the top five. This means that ŠKODA cars took four of the five first places, and six of them were in top ten.