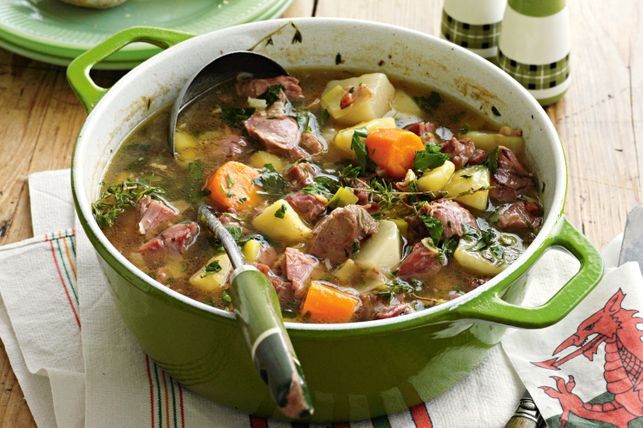 Wales: Where meals are not what they seem to be | Eat like a rally driver

The next WRC2 rally is one of the oldest and it’s based in Wales, Great Britain. Wales is famous for its unpredictable weather, and also for confusing recipe names. Let’s take a closer look at a few typically Welsh meals so you know what to order when you’re visiting, whether as a driver or spectator.

Almost all of the traditional Welsh recipes were made by hardworking, stoic people who lived off the land. They used quality ingredients to make simple dishes that would fuel their demanding lifestyle. Many of the meals are very nutritious and worth trying if you want to stay in shape and maintain race weight.

If you’re looking to try some rabbit meat then Welsh Rabbit, surprisingly, is not the right meal for you. There’s no rabbit in it! Welsh Rabbit, also called Welsh Rarebit, is actually baked cheese on toast. Don’t be fooled by its simple looks, though, it’s a real delicacy, made with quality welsh Cheddar, eggs, local beer, Worcestershire sauce, mustard, and Cayenne pepper. It’s full of protein and healthy fats so don’t hesitate to give it a try as a nice warm dinner.

Penny Lewis from the The Culinary Cottage teaches us how to make her Welsh Rarebit Recipe. Welsh Rarebit, formerly spelled rabbit, has nothing to do with the furry animal. The rarebit is a classic Welsh finger food consisting of a cheese infused roux sauce (flour and butter sauce) on toast. In addition to cheese, Penny's version infuses the roux with a light ale, mustard, and cayenne pepper. In simpler terms, the Rarebit is a gourmet version of melted cheese on toast. This favorite dish of many Welsh will have you questioning your grilled cheese sandwiches. Penny's advice is to make sure your smear the topping on every last inch of your toast to almost encourage a spill over. And of course to eat the rarebit with your hands! For the full recipe visit www.therecipehunters.com/welshrarebit Thanks @penelopelewis4790 for making us feel at home in the Culinary Cottage and for teaching us your recipes! Thanks to @visitwales for making this film and series possible. Music Credit: Thanks to the talented musicians Oliver Wilson-Dickson for the first song: Hela'r Swarnog and to Oliver Wilson-Dickson and The Devil's Violin for the second song "Hen Ferchetan" in this film. #visitwales #recipehunting #findyourepic #wales #rarebit #welsh #welshfood #welshrarebit #rabbit #cheese #cheesy #wales #cymru

Careful what you’re ordering, because there’s no bread in Laverbread! Laverbread, bara lawr in Welsh, is a puree made from an edible seaweed called Laver. It’s really nutritious, rich in protein and full of minerals such as iodine and iron. The high iodine content gives Laver a distinctive flavour, similar to olives and oysters. It’s a popular part of the Welsh miner’s breakfast, along with bacon and eggs, so if you want to start your day strong, give it a try!

If you’re expecting another twist you won’t be disappointed – because there’s no meat in these sausages! Glamorgan sausages are vegetarian, made from cheese, leeks, and breadcrumbs, all fried until golden. These sausages, known in Welsh as Selsig Morgannwg, were especially popular in the post-war years when meat was scarce, but although they’re tasty they don’t have much to offer in terms of nutrition. If you’re after meat, you should try the Welsh Cawl instead.

Glamorgan Sausages put mozzarella sticks to shame, they’re a vegetarian delight, and combine a crunchy outside with a flavorful gooey cheese inside! So what’s not to like?! Why sausage then? They the name from the shape since they are rolled into sausage logs before pan frying!! We were so lucky the lovely @hazel_ppp who is a fantastic cook that taught us her fail proof Glamorgan Sausage recipe that is made with 100% love! Big shout out to @collinscudder for hooking us up with his song “Helping Hands” that we found at @soundstripemusic @visitwales to #findyourepic food experience! #wales #welsh #glamorgansausages #cymru #food #goodfood

Cawl is a traditional Welsh soup, so there’s no misleading name this time. It’s a stew whose main ingredients are lamb and leeks. It’s usually very rich, full of potatoes, carrots, and other seasonal veggies. The recipe varies from region to region, but it’s usually served with bread and local cheese. If you want some good protein, lots of veggies, and a lot of energy in one healthy meal, you can’t go wrong with Welsh Cawl.

If you want to try something sweet, then traditional Welshcakes are definitely the thing for you. They are made from flour, butter, currants, eggs and milk, and they are delicious! They come in many flavours and can be served hot or cold – but remember, if you’re trying to eat properly and maintain a healthy weight, this is not the food for you.

We will recommend you a wonderful cake recipe from Great Britain cuisine: Traditional Welsh Cakes! You can prepare this recipe in about 20 minutes. Traditional Welsh Cakes are really tasty and so easy. Let’s start this cake recipe! INGREDIENTS ▪ 1 egg ▪ 1/2 cup sugar ▪ 2 cups of flour ▪ 100 grams of butter at room temperature ▪ 3 tablespoons milk ▪ 1 dessertspoon baking powder ▪ 5 tablespoons blackcurrant ▪ 1/2 teaspoon cinnamon INSTRUCTIONS 1 Transfer flour, sugar and baking powder to a deep bowl and mix them. 2 Obtain a lumpy mixture by adding butter over it. 3 Add the blackcurrant to the mixture. 4 Beat well the eggs together with milk on a separate bowl. And then, add it to the mixture. 5 Knead them to obtain a soft dough. 6 Spread your dough thinly. Obtain 16 rounds with the help of a glass. 7 Lightly lubricate your pan. 8 Cook both sides of your round dough for three minutes, too. 9 Sprinkle some sugar or powdered sugar on your cakes. 10 That’s it! Bon Appetit! ? #welshcakes #britishcuisine #britishfood #welshcake #oxochef #foodrecipe #cakeideas

Bara brith means speckled bread in Welsh and, for once, that’s exactly what it is. It’s a bread made from self-rising flour, flavoured with traditional brewer’s tea, raisins, dried currants, and a mix of cloves, nutmeg, ginger, and cinnamon. It’s served at tea timewith butter spread on top. It’s a tasty treat to go with a cup of tea but don’t mistake it for a healthy breakfast!