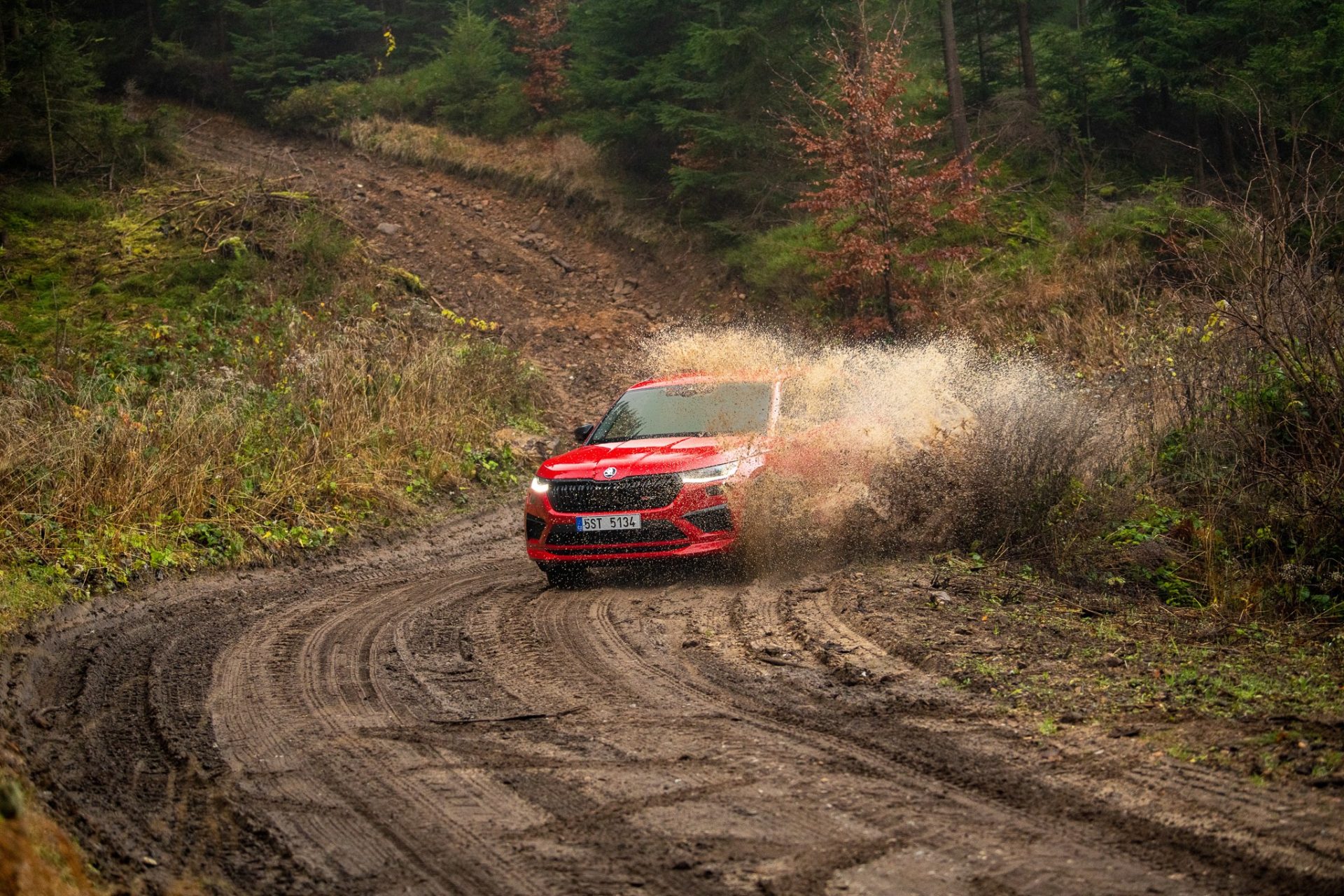 Places where success is created

Before the green-and-white Škoda Motorsport caravan hits the test tracks in various parts of Europe, it tests at three well-proven locations in the Czech Republic. We've visited all three of them with the RS family models – come and see where these venues are and how they're continuously helping development!

Červená Voda
Červená Voda is a picturesque village on the border of the Eagle Mountains and the Jeseníky Mountains. In the surrounding forests there are two gravel tracks, which are used for basic testing of the car's gravel setup. Their specific character is like the tracks in Wales: the local gravel is partly covered with coarse stones and also with classic forest mud, which can be very slippery. There is often a lot of logged wood around the track, which is also very typical for Wales.

The tracks around Červená Voda are quite rugged with slow and fast turns and jumps. Due to the higher altitude, there is usually plenty of snow in the winter, and the location offers the possibility of a snow test with long-spiked tyres, for which conditions are not suitable anywhere else in the country. Oliver Solberg, for example, drove his first kilometers in the Škoda Fabia Rally2 evo on snow here.

Thanks to the broken surface, the tracks in the vicinity of Černá Voda are well suited to test the durability of all body and chassis protection, such as running boards, wheel arches, floor covers and other components. The developers also focus on testing shock absorbers, springs, stabilisers and differentials for gravel competition. Tests are conducted here once or twice a year, for a maximum of two days each time. After a day's riding, the track is rutted, large rocks and drainage channels are exposed, which disproportionately increases the risk of punctures.

The Kodiaq RS, with its higher ground clearance, handled the local rough gravel very well. The winter tyres offered plenty of grip even on the coarse rocky ground, and the dampers in the softer comfort mode again filtered out any bumps in the forest passages. A few sprinkles from the deeper puddles added certain competition´s car patina to the special.

Červená Voda has one more pleasant specificity: the service facilities here have the character of a forest camp. There is a gazebo with an open fireplace, where many of the world drivers tasted typical Czech sausages roasted on the fire, prepared by the team mechanics. 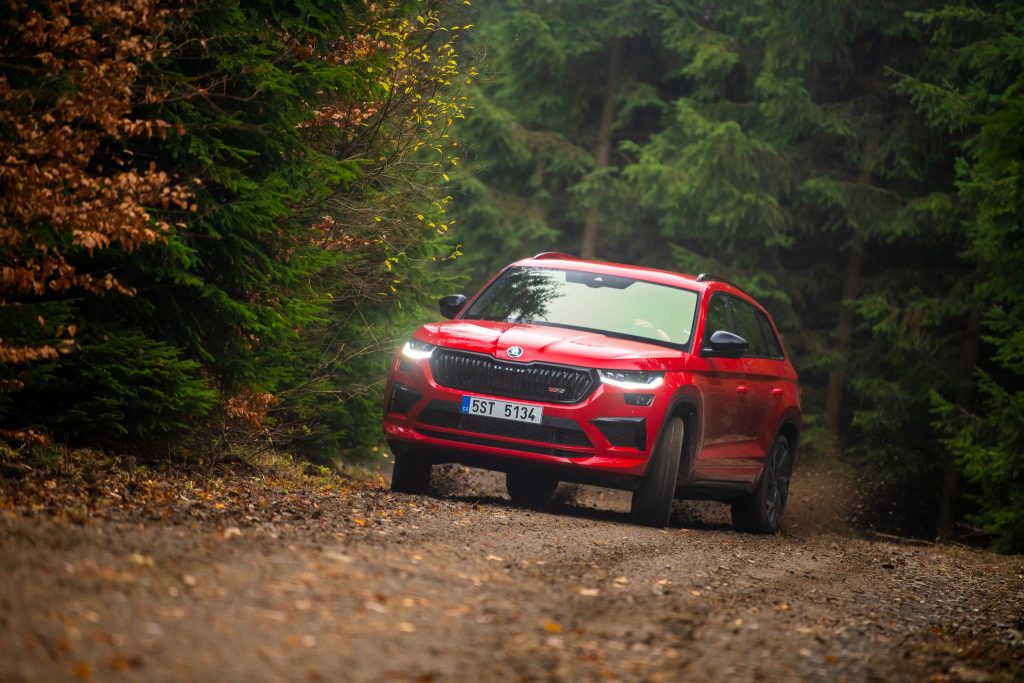 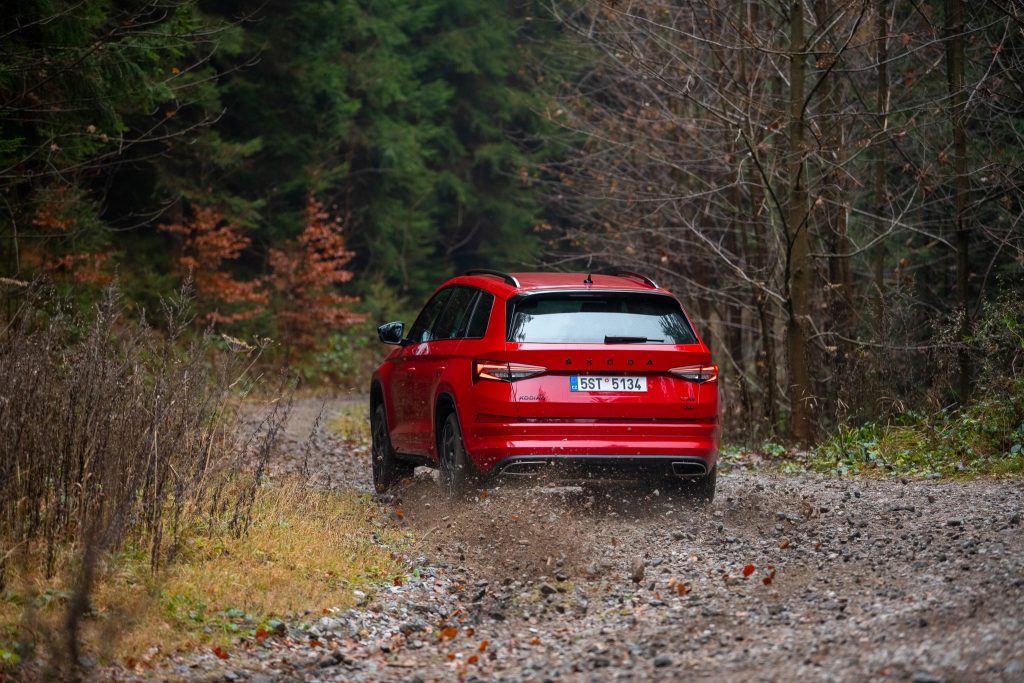 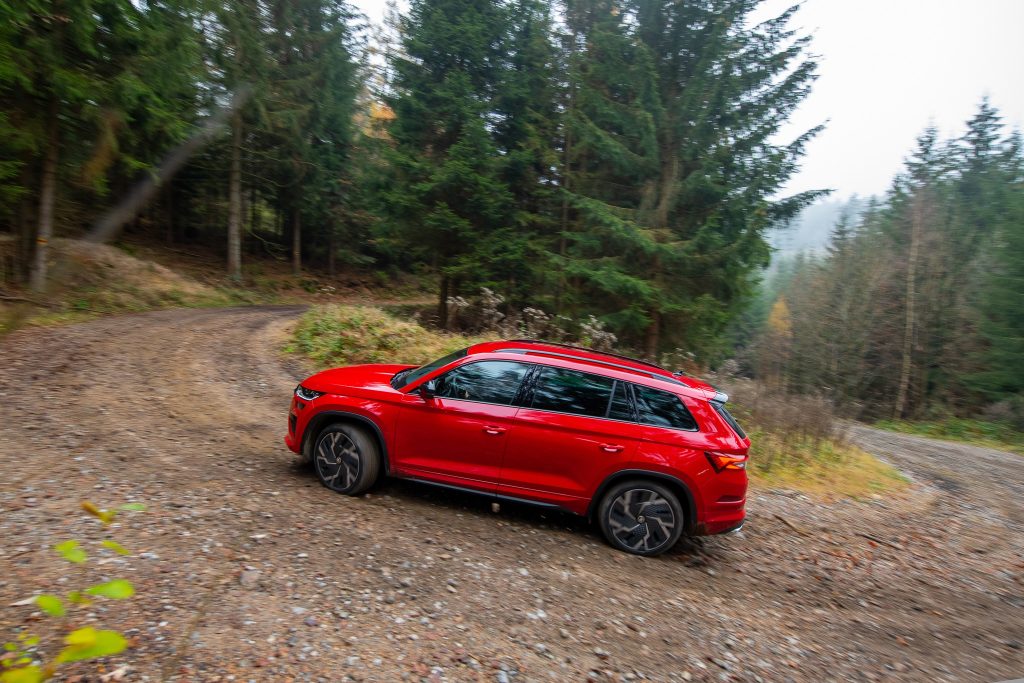 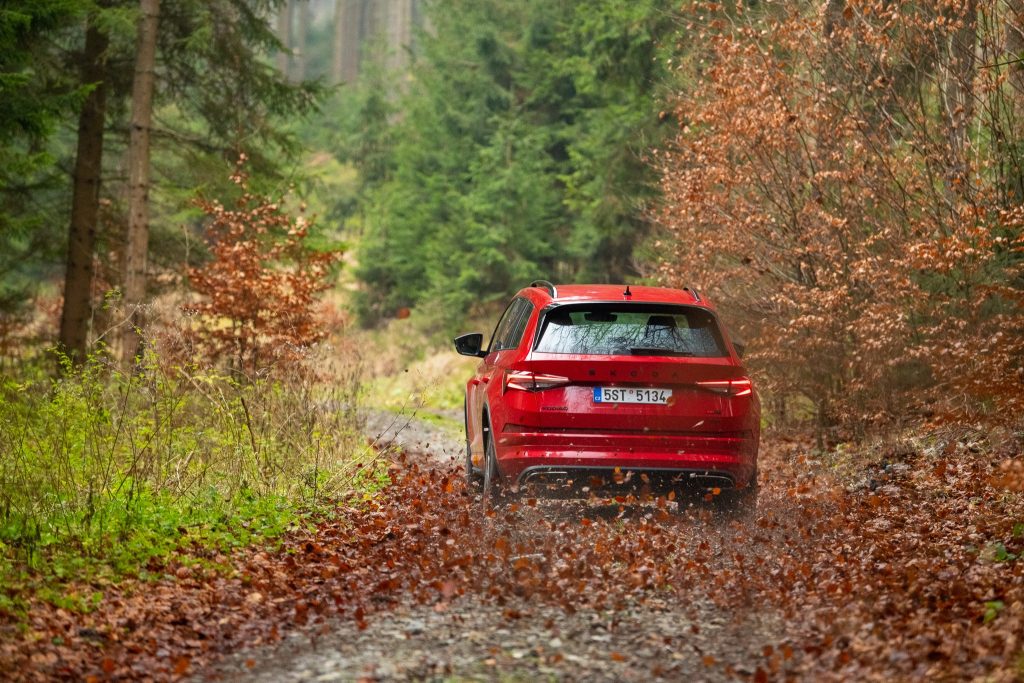 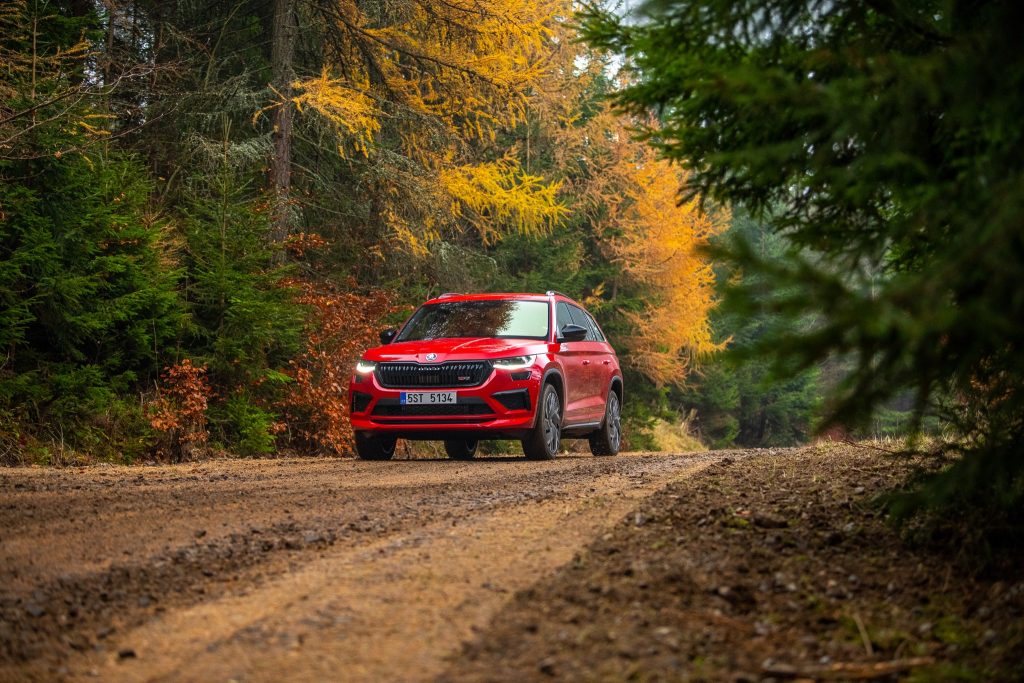 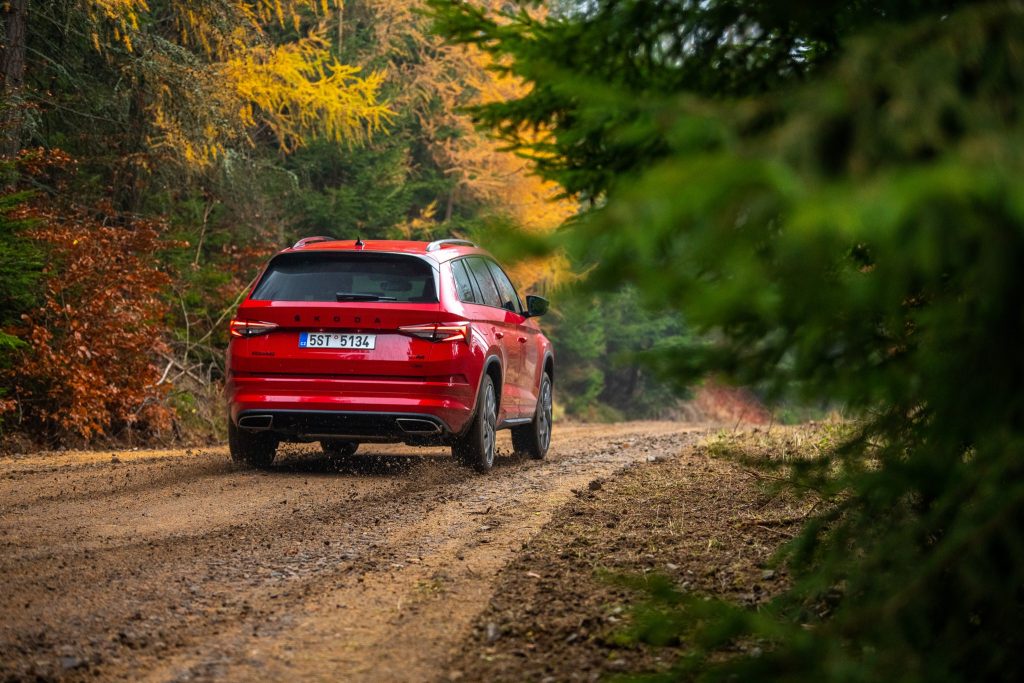 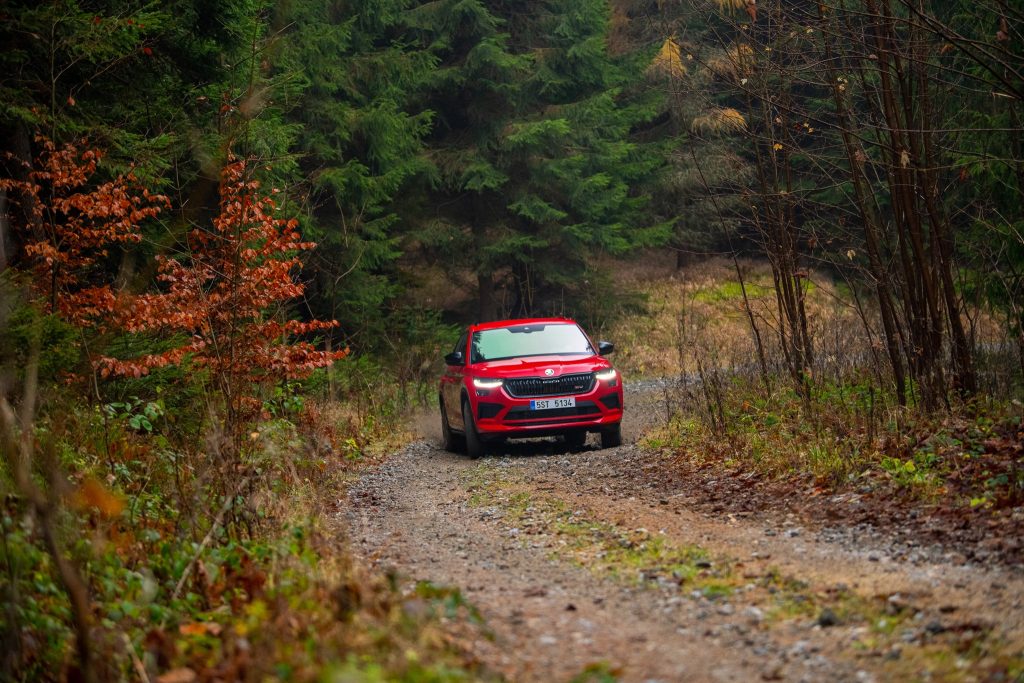 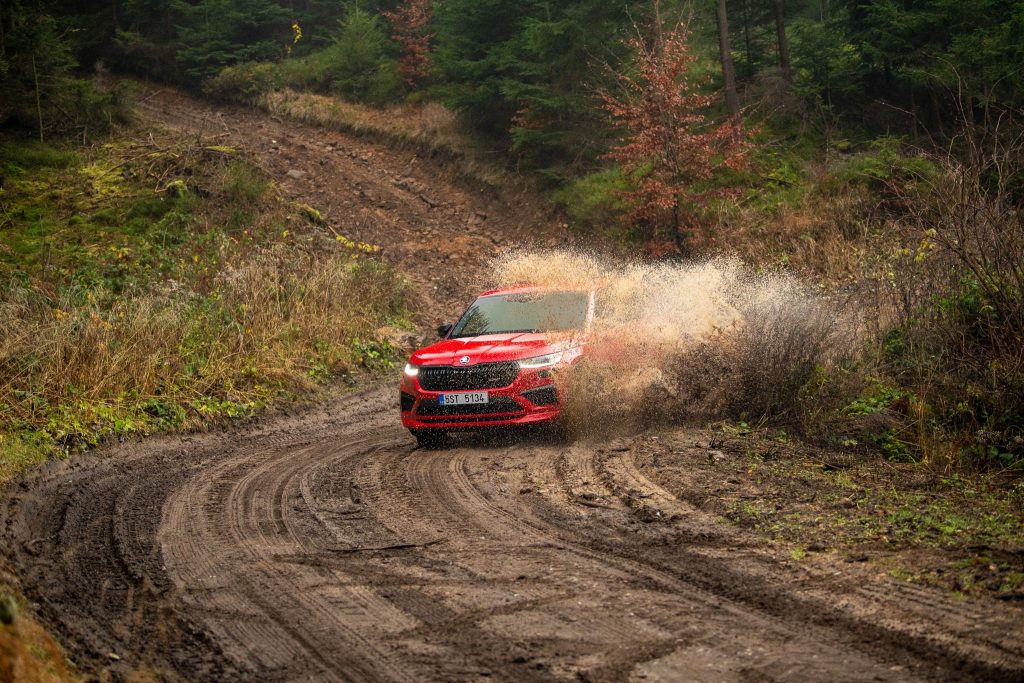 Bělá pod Bezdězem
The track in Bělá is very close to the team headquarters in Mladá Boleslav. It takes a truck about half an hour to get here, so the Škoda Motorsport test team is a frequent guest here. The whole area is a former military area where Soviet troops stayed in the territory of the former Czechoslovakia. In one part of it, there is a relatively narrow and rugged circuit that simulates an asphalt special stage. The track is closed and well secured, which allows you to drive a lot of kilometres in one day.

There are also relatively comfortable facilities for the team's needs, where the technicians can evaluate all the necessary data in the warmth. The track has a mostly smooth surface, but there is a significantly undulating section with a worse surface at the back before the descent into the back sharp corner. In wet conditions the surface is very slippery. Bělá also serves as a back-up location to check the basic functionality of the cars before competitions and tests if the Škoda polygon is not available.

Bělá pod Bezdězem allows relatively safe driving tests on a real competition track with special sensors on the car. Thanks to its long straight and rugged profile, it is also perfectly suited for brake system development tests. The good facilities also make it a prime location for customer or VIP co-drives. Many of our employees, customers and partners got their first taste of driving a competition car in the passenger seat here.

The Octavia RS is a joy to drive on the local track. The smooth asphalt offers good feedback, and the good chassis set-up can also handle the broken passages at the rear of the circuit without any problems. On the slippery descent into a corner at the rear, the car even pushes off the rear slightly on the brakes and you feel like you're in a rally special. What a ride!

Apart from the mysterious castle on the hill above the track, there is another legend connected to Bělá. The story goes that it was at the local area that the team first saw a big smile on Kalle Rovanpera's face. In fact, while filming on this track, Kalle saw his father Harri Rovanpera driving a Fabia WRC car at a brisk pace. In the haze of the frosty Bělá mornings, the sound of the WRC car's engine is said to reverberate through the woods to this day. 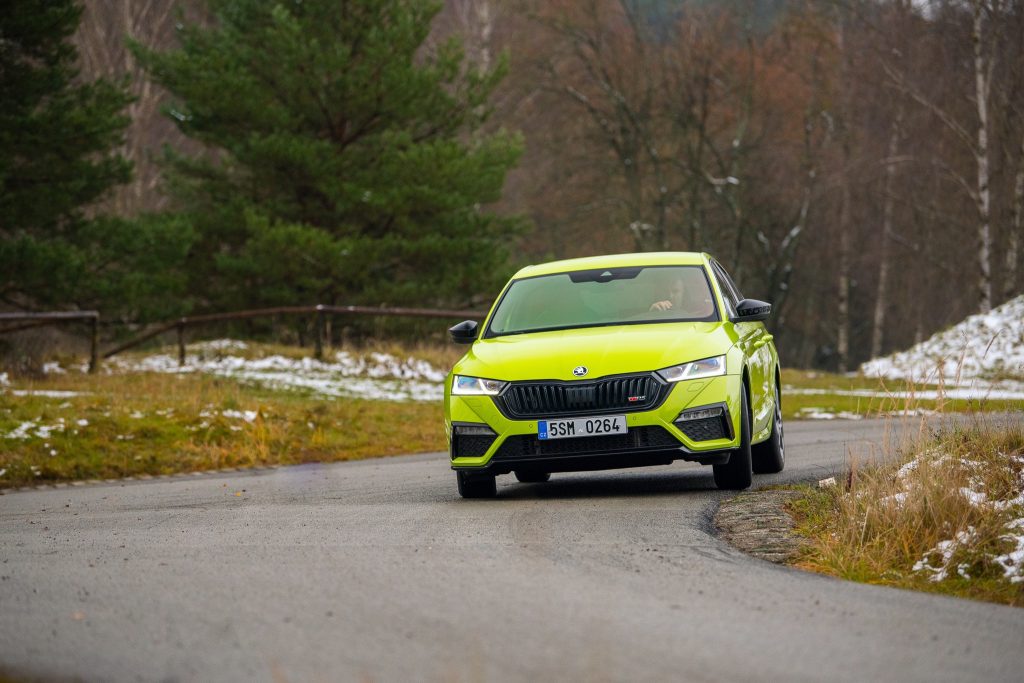 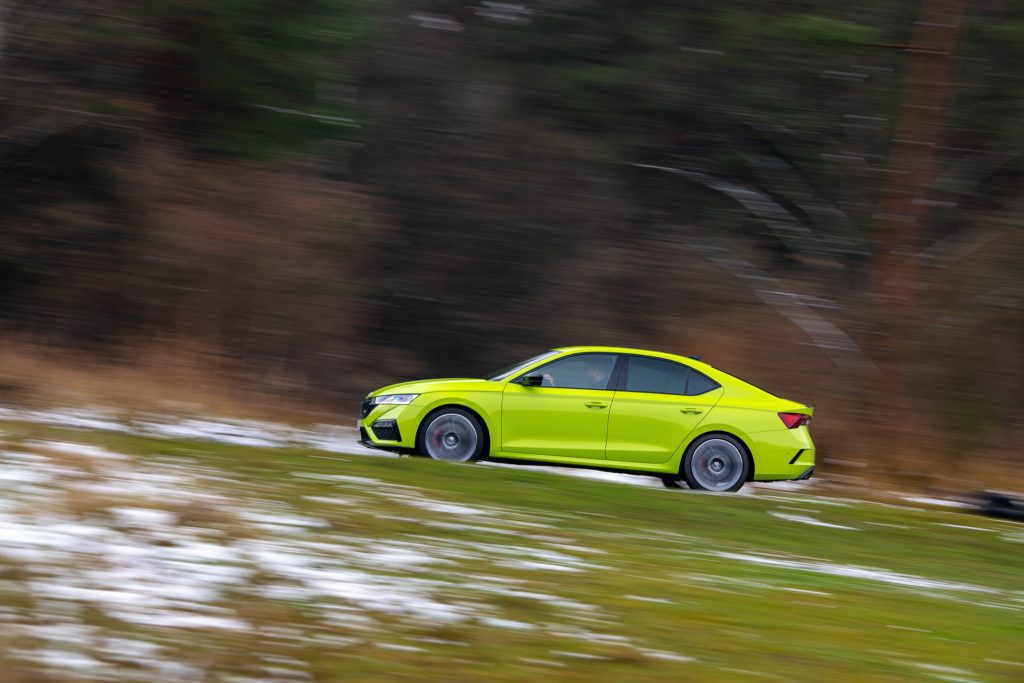 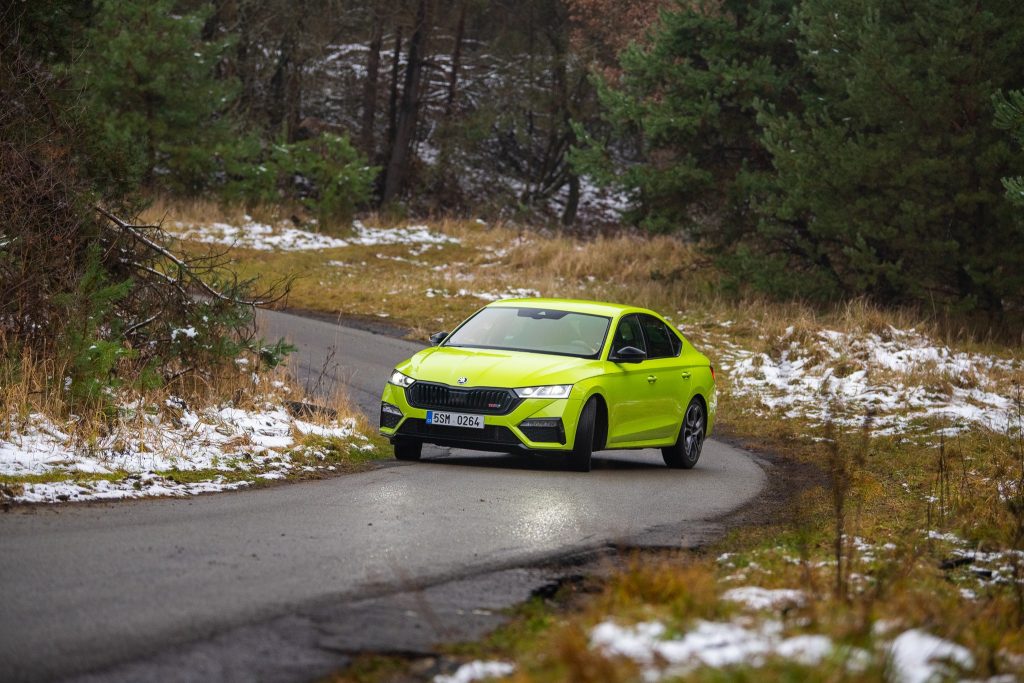 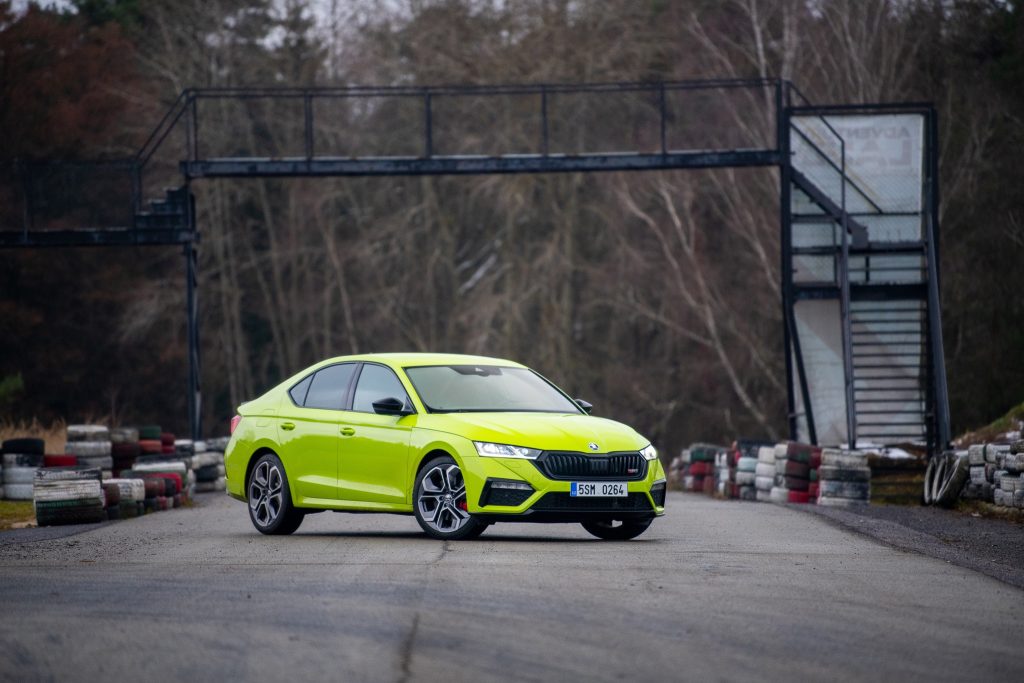 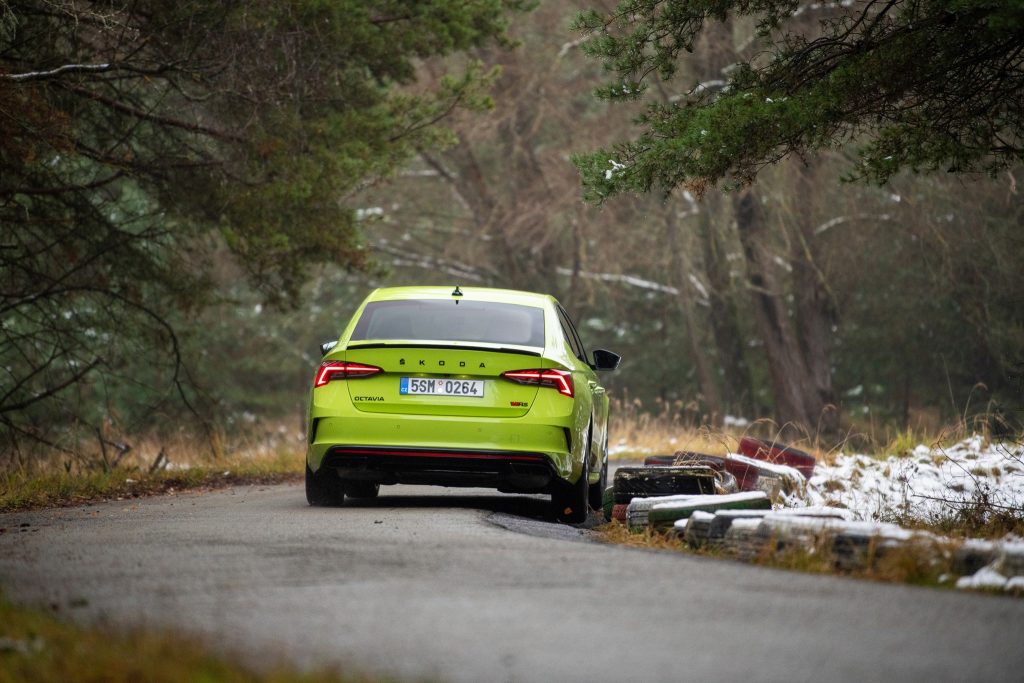 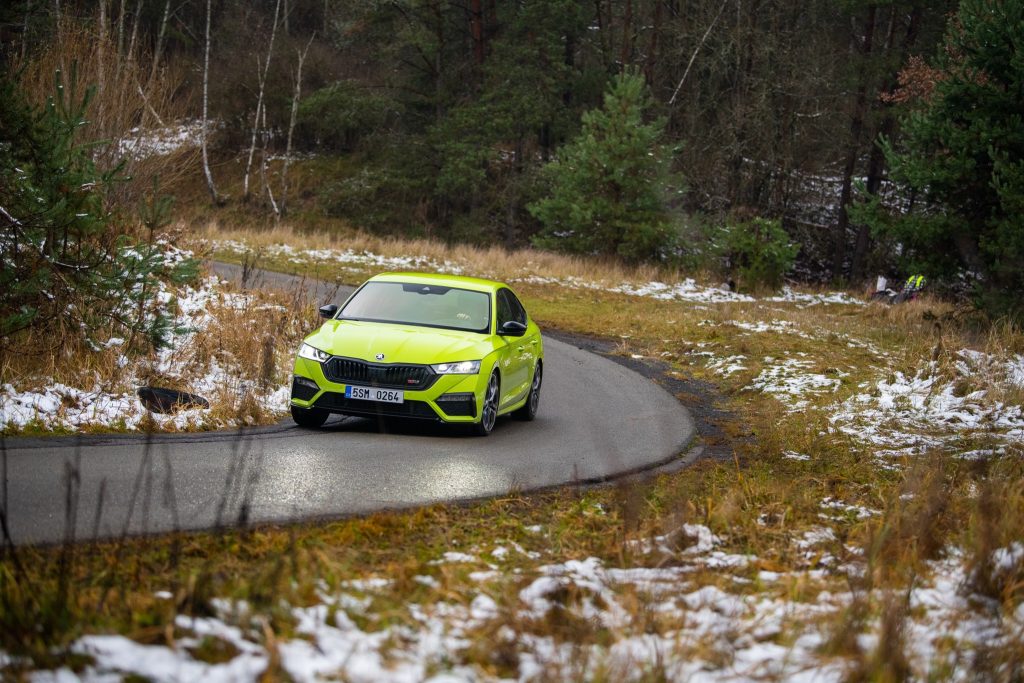 Malšín
South Bohemia offers a beautiful landscape interwoven with endless kilometres of narrow asphalt roads. And this is where the Škoda Motorsport team spends a lot of time. The new Škoda Fabia RS Rally2 made its first sharp kilometres on local roads during the summer of 2021. The track in the area around Malšín is a typical place where the car sets up well on the fast and rutted surface that characterises the tracks of the Czech Rally Championship. This is especially the case for the shock absorbers, springs, and stabilisers. In addition to the chassis set-up, the engineers here also focus on development tests of the shock absorbers, which really get a hard time on the local asphalt. The local tracks have also not escaped the attention of the WRC promoter, and just a few kilometres to the west, the Šumava foothills will host the first ever WRC event in the Czech Republic in 2023. The development experience will thus undoubtedly be useful to customers with Škoda Fabia cars.

We drove the local track with the Enyaq Coupé RS iV. On a slippery wet surface with puddles and pine needles from the surrounding trees, its all-wheel drive worked perfectly. On the exit of a sharp left turn in the middle of the track, the car was able to transfer its 300 horsepower to the road on the muddy surface after logging and burned off towards the next passage of the track. The combination of comfort, composure and speed is very captivating in the RS family's first all-electric car.

South Bohemia is an area with a long rally tradition. With two rallies taking place relatively close to each other, there are a lot of motorsport fans among the local population. Even during testing, there are plenty of fans along the track watching the Škoda Motorsport team's development work. If there is a test here, fans from all over the world will quickly find out thanks to social media. 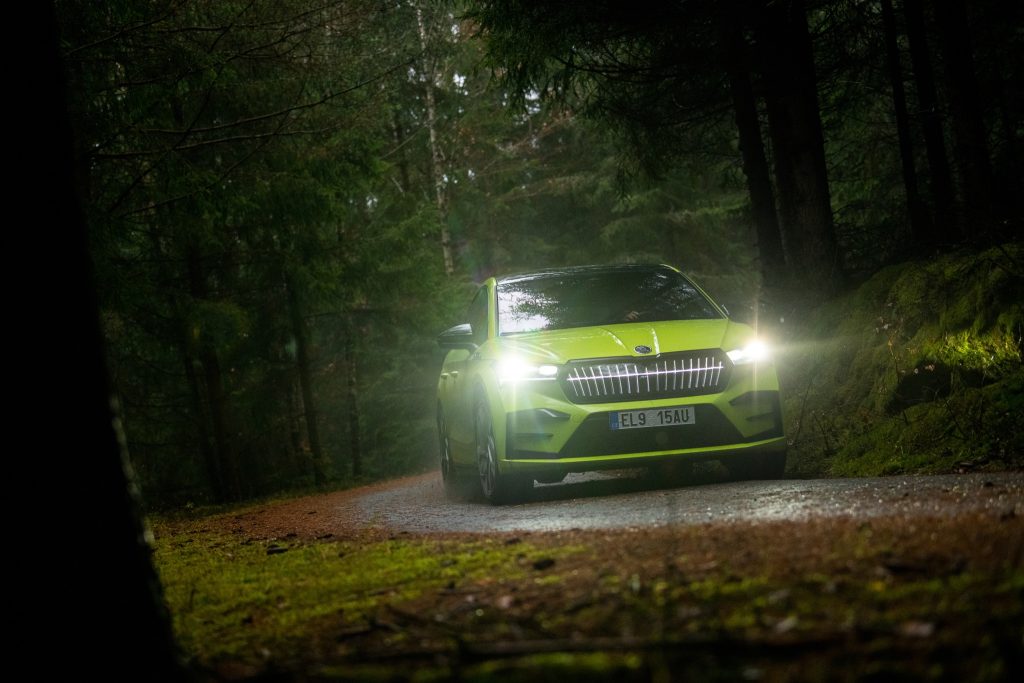 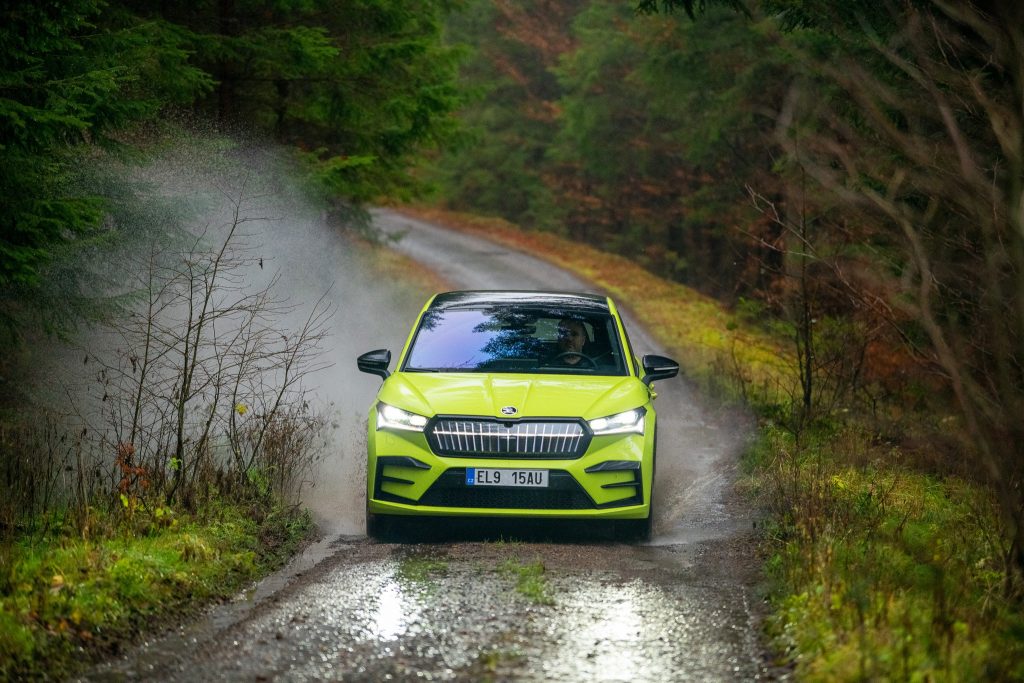 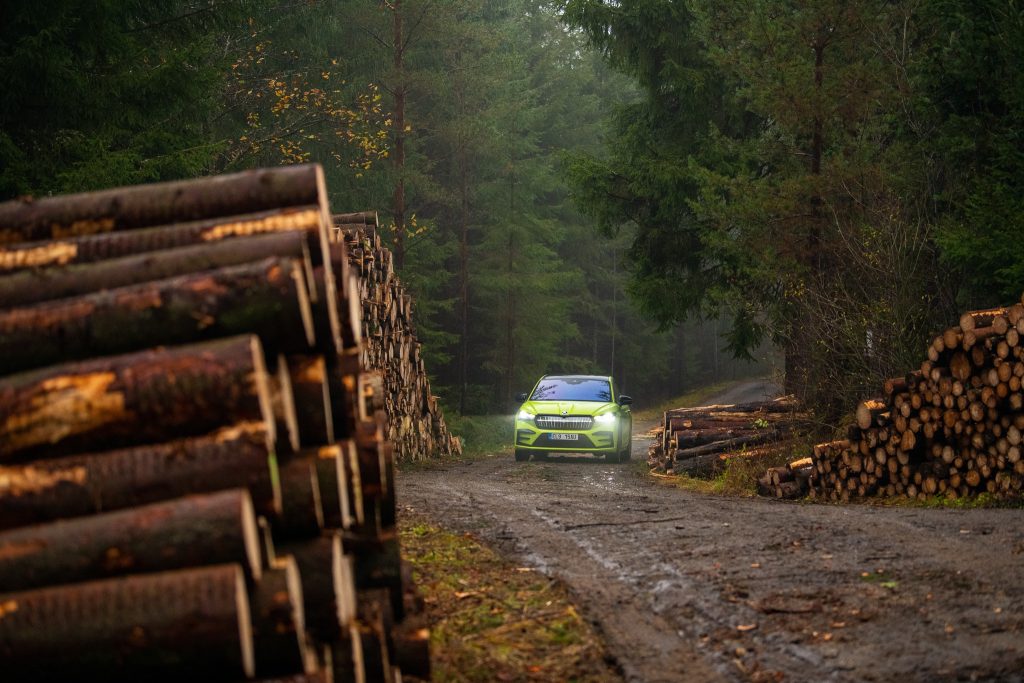 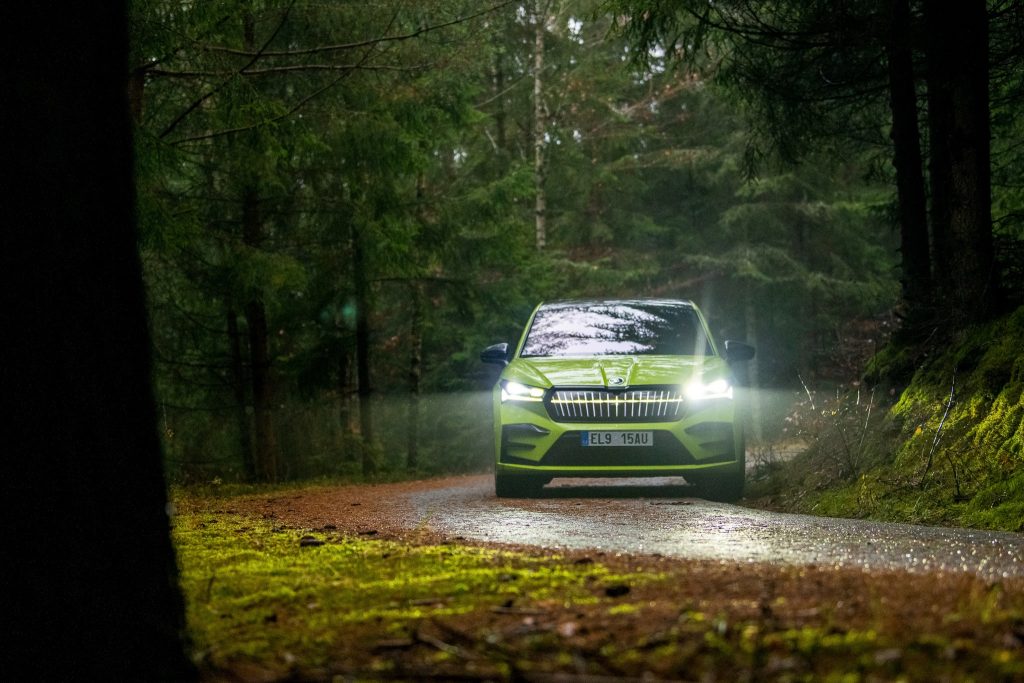 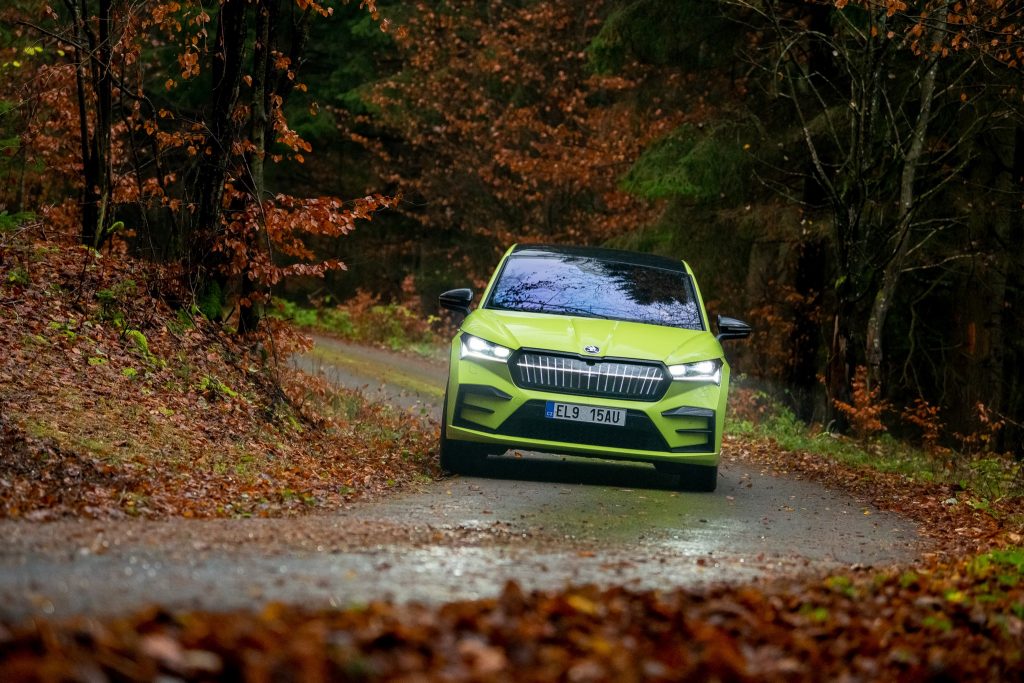 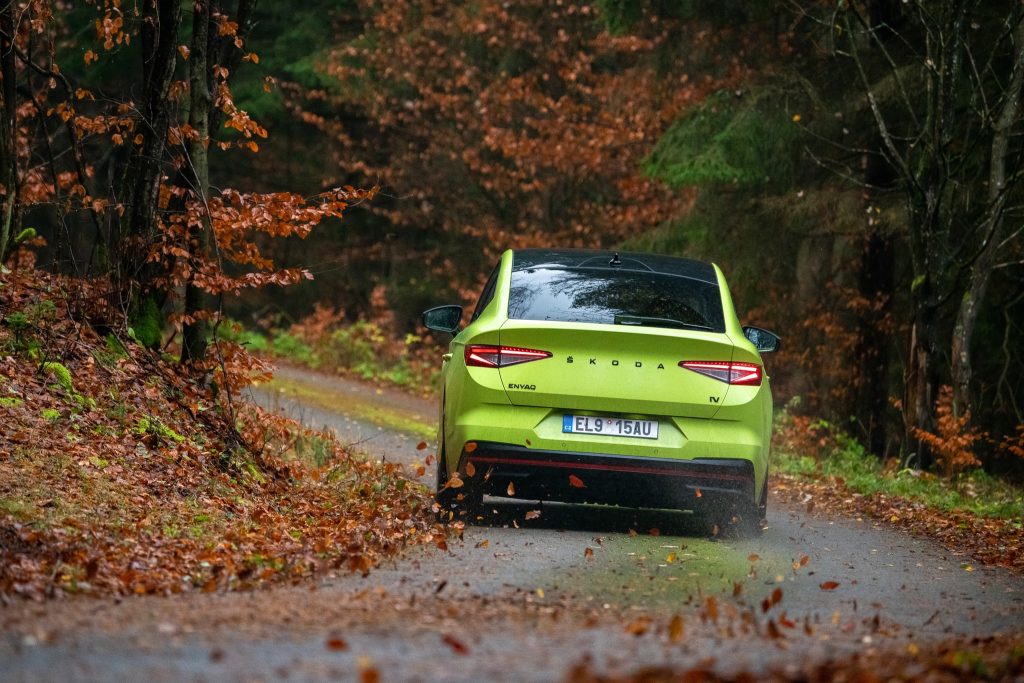 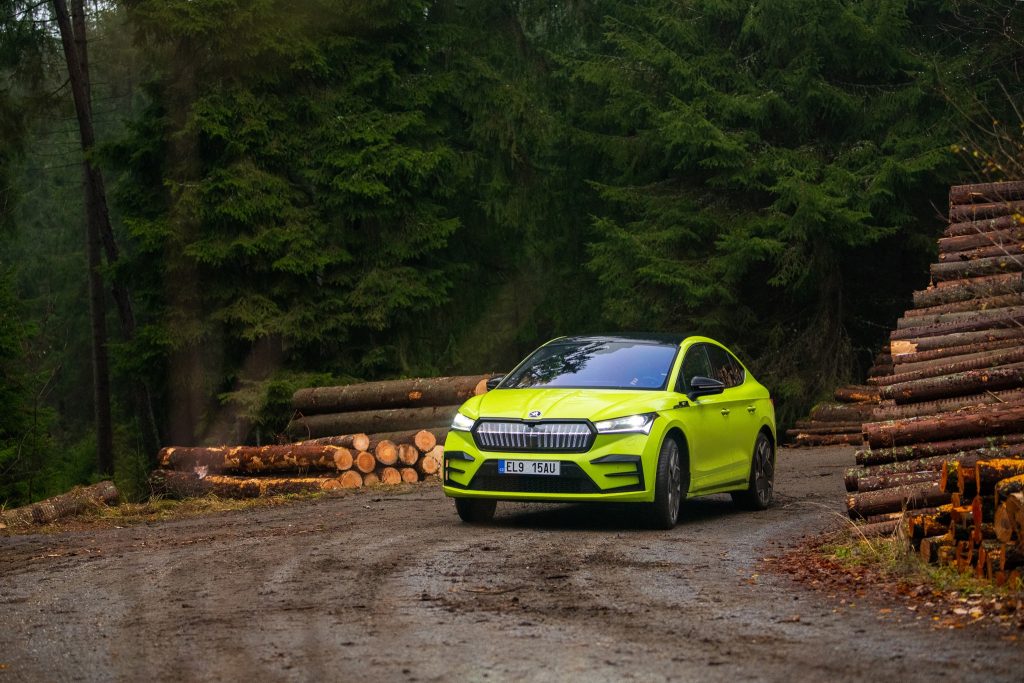