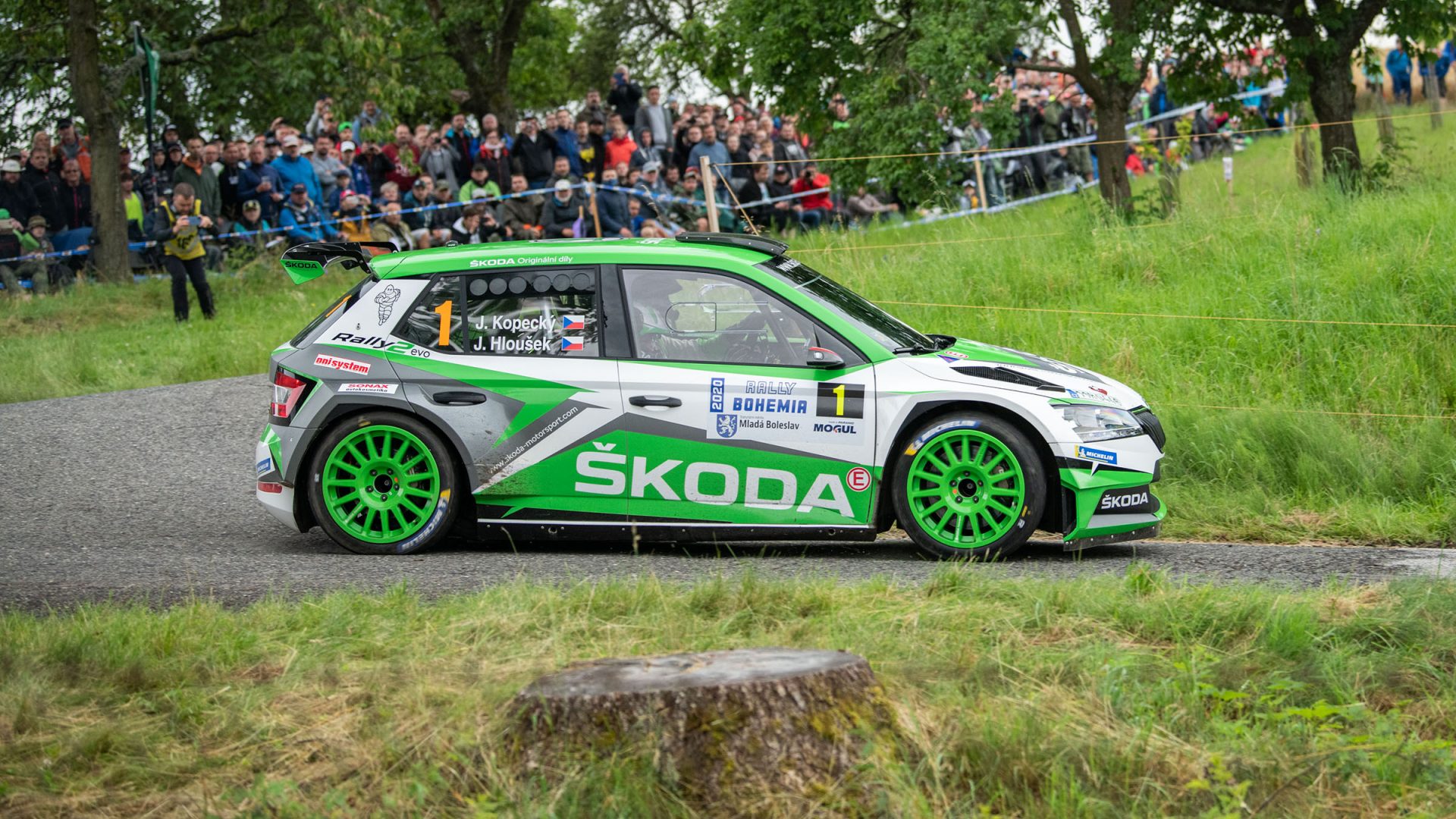 While the World Rally Championship is still on hold, the Czech championship begun this week with its first big rally, the traditional Rally Bohemia, the home event of ŠKODA Motorsport. The great interest among top drivers suggested that we can expect interesting battles, which was confirmed right on the first day. There was also a huge number of ŠKODA FABIA Rally2 and Rally2 evo crews on the entry list.

In this article, you will find information about the fastest times, photos from location and results of the factory crew Jan Kopecký – Jan Hloušek and the customer crews fighting for podium finishes driving ŠKODA cars.

Saturday: A fight for seconds

First Saturday runs have shown that this year’s Rally Bohemia will once again be a challenging one with changing condition. The night’s heavy rain stopped just before the start of the first urban stage, with took place on wet cobblestones in the centre of Mladá Boleslav. The drivers had to be really careful, but it was a good practice before moving to Jizera Mountains, where the crews had to once again cope with the wet track, occasionally covered by dirt. In the first of the five “real” stages, the Finnish duo Jari Huttunen – Mikko Lukka, driving a Hyundai i20 Rally2, took the lead, followed by Václav Pech junior and Petr Uhel on Ford Focus RS WRC. The third place overall belonged to Filip Mareš and Radovan Bucha (ŠKODA FABIA Rally2 evo).

However, Jan Kopecký, who took a careful pace with his FABIA Rally2 evo works car, was in the fourth place, just 6.6 seconds behind Huttunen and as the tarmac dried, he started to close up the gap. In the following two stages, he moved to the third and then to the second position, finishing the morning part of Saturday’s leg just 1.1 seconds behind the leading Finn. “We are trying to add speed gradually. The conditions are challenging, even though the last two stages were a bit drier”, commented Kopecký.

Filip Mareš kept the fourth place behind Václav Pech, followed by Petr Semerád driving another FABIA Rally2 evo. Mareš, the last year’s junior ERC champion said that even considering his good pace in the first runs, he’s aware of reserves in his driving and plans to get faster in the afternoon. Also successful was Austrian crew of Simon Wagner and Gerald Winter, also on FABIA Rally2 evo. Although they’re fighting with too soft setup of their car, they kept fifth place overall. Looking at close results of the top drivers, it’s clear that the battle for seconds will continue in the afternoon.

The intensity of the afternoon’s competition at Rally Bohemia is best illustrated by the fact that the times of the first four drivers – Jari Huttunen, Jan Kopecký, Václav Pech junior and Filip Mareš – were within four seconds in each of the five stages. When it comes to stages won, Pech claimed three and Kopecký and Huttunen one each. At the end of the day, the Finnish crew kept the lead, but the ŠKODA Motorsport factory crew was only 0.6 seconds behind. Thanks to the performance of Filip Mareš and Petr Semerád, the ŠKODA FABIA Rally2 eco crews also kept the fourth and fifth place in overall classification.

“We are satisfied, but it sure didn’t go as we expected. We have to think about it with the team,” commented Kopecký at the finish of the Saturday’s leg, suggesting that he had different expectations. Filip Mareš, who stayed in the leading four the whole afternoon, also wants to get even faster: “I was learning in every stage. It gets better and better and I believe we will continue doing the good work tomorrow.”

The Sunday's quick pace has shown that the team meeting was useful for ŠKODA Motorsport, while the Finns started to lose. In the first stage, Kvítkovice, Pech won, 1.6 seconds ahead of Kopecký, while Huttunen finished ninth and fell to the third place in the overall classification. This moved Pech to the first place, just a tenth of a second ahead of Kopecký. The second stage, Chloudov, was dominated by Kopecký, allowing him to jump to the lead, 0.3 seconds ahead of Pech. In the morning's final stage, almost 22 km long Radostín, Pech with his WRC car once again moved to the lead, 6.2 seconds ahead of Kopecký. At this point, Huttunen in the third place was already losing 33.1 seconds to the lead, Filip Mareš was 48.1 seconds behind and Petr Semerád was losing a 1 1/4 minute.

“We can't go any faster, I have my admiration for Václav,” complimented Kopecký his competitor – and it will be interesting to watch how he will deal with the situation in the final part of the rally. On the other hand, Huttunen did not hide his frustration from the Sunday's events. “It's not good, the car doesn't work right, we don't have the right setup,” he claimed.

The battle for seconds continued even in the afternoon's second runs. Kopecký won teh first one, 0.2 seconds ahead of Pech, while the second and third went to Pech, 0.8 and 0.4 seconds ahead of Kopecký. The final short stage in the Mladá Boleslav's centre did not change anything in the overall standings and thus the crew Václav Pech jr. – Petr Uhel won this year's Rally Bohemia. Jan Kopecký and Jan Hloušek took the second place for the ŠKODA Motorsport, 7.2 behind the leaders.

The duo of Jari Huttunen and Mikko Lukka in the end managed to keep the third place even facing troubles with the car's setup, while Filip Mareš and Radovan Bucha secured the fourth. Half of the top ten were ŠKODA FABIA Rally2 and Rally2 evo cars – besides Kopecký and Mareš, Simon Wagner from Austria and Czech drivers Miroslav Jakeš and Věroslav Cvrček made it into the top 10.

“I'm satisfied with our performance, especially as we drove really flat-out on Sunday. It's a pity that it was only enough for the second place. We now have to come up with a way to become even better the next time,” concluded Jan Kopecký after Rally Bohemia.