The Rallye Casinos do Algarve (17-18 November) was the ninth and final round of the Portuguese Rally Championship. But it was also chosen by the FIA as the host of the 2017 European Rally Trophy (ERT) Final and saw some impressive performances from the ŠKODA FABIA R5 drivers competing, as ŠKODA cars took the top four places in the ERT standings.

The ERT is an FIA competition that brings together the European regional trophies (Alpine, Balkan, Baltic, Benelux, Celtic, Central and Iberian) into a grand finale. Across all seven championships, the top five overall drivers in each of the four categories (ERT, ERT 2, ERT 3 and ERT Junior) qualify to compete in the Rally Trophy Final.

This year’s European Rally Trophy winner, who also finished in second place overall, was the FABIA R5 driver Yağız Avci. Driving alongside co-driver Bahadir Gücenmez for Neo Motorsport, in a car prepared and run by Baumschlager Rallye & Racing, the Turkish driver finished 33.6 seconds ahead of the ERT field. His performance was all the more impressive when you take into account that this was his first ever drive in a FABIA R5.

Avci qualified for this event by finishing third in the Balkan Rally Trophy standings, but as a five-times Turkish rally champion (2009, 2010, 2011, 2013 and 2016) had plenty of experience to bring to this one-off event. Finishing as runner-up in the ERT and third overall were the ACCR Czech Team pairing of Vojtěch Štajf / Markéta Skácelová. Štajf finished more than a minute ahead of his nearest rival after putting in one of the most impressive international drives of his career. He started slowly, sitting in sixteenth position after the opening special stage, but drove with speed and consistency to climb through the field.  Štajf qualified for this event by finishing third in the Central Rally Trophy standings.

Completing the ERT podium in third place and finishing fourth overall was the ARVidal Racing team crew of Pedro Meireles / Mário Castro. Meireles was going well in second place overall until an incident on SS10 cost him valuable time and saw him fall back to fifth overall before making up a place over the final three stages. That result also meant that Meireles secured second place in the Portuguese Rally Championship standings.

Coming home fifth overall and completing a One-Two-Three-Four result for ŠKODA in the ERT standings was the Tlusťák Racing FABIA R5 of Antonín Tlusťák / Ivo Vybíral. Tlusťák finished second in the Central Rally Trophy to qualify for this event and grew into the rally, driving with steadily improving times and showing great consistency throughout.

The Rally Australia (17-19 November) was the thirteenth and final round of the FIA World Rally Championship (WRC). With Pontus Tidemand having long since wrapped up the WRC2 title for the ŠKODA Motorsport team, it was a relatively small field that made its way down under, but that is not to detract from a superb drive from Richie Dalton.

Irishman Dalton was driving alongside Australian co-driver John Allen for the Shamrock Motorsport in a ŠKODA FABIA R5 prepared and run by Racetorque Engineering. This was his first ever drive in this car and just his second event of the year. In fact, he has only driven four rallies since winning the Australian 4WD Series in 2014.

The Rally Australia was the first time he had finished since that title win too and he did it in some style. Dalton was the RC2 class winner, finishing more than eight and a half minutes ahead of his closest challenger, the talented young Finn and newly crowned Latvian rally champion Kalle Rovanperä. His time also meant he finished in eighth position overall.

For those not familiar with Dalton, he is a part-time driver who only stepped into a rally car in 2012 at the age of 30. To date he has driven two full seasons in Australia in 2013 and 2014, culminating in his Australia 4WD Series title win. He was planning to drive this season in the New Zealand Rally Championship, but problems with his car saw that put back to 2018. In the meantime, when the chance to drive an ex-factory FABIA R5 came up, Dalton and co-driver Allen leapt at it.
And understandably, Dalton was delighted with the result. 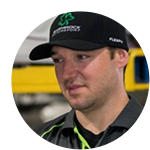 “What a weekend! This is the stuff dreams are made of,” said Richie Dalton after the rally. “The result is like looking at the end of a PlayStation game. This was our first time in a left-hand drive car, first time in an R5 and first time entering the World Rally Championship. To finish eighth overall, first in the RC2 class and claim a few top ten stage times along the way is just unbelievable.”

Congratulations to Richie, John and all the Shamrock Motorsport team from everyone at ŠKODA Motorsport and our best wishes to him next year in the New Zealand championship. We hope to see him back in a FABIA R5 again soon!

Our round-up this week begins with the Rallye National de l'Indre (18 November), where Nicolas Hernandez claimed his fifth podium in the French Cup with a FABIA R5. Driving alongside co-driver Ronan Choucroun, he finished second overall, just 16.9 seconds behind the overall winner. Meanwhile, Thierry Bureau finished third in the R5 class and in fifth place overall in his first ever rally in a FABIA R5, alongside co-driver Martine Roché.

And in Italy, at the Rally Ronde Colli del Monferrato e del Moscato (18-19 November), the French duo of Anthony Puppo / Vincent Delaplanche finished second in the R5 standings and third overall for the VM Motor Team. They were just 16.2 seconds behind the overall winner, who was driving a WRC-category car. Patrick Gagliasso / Dario Beltramo, who were driving for the Sport Management team, came home fourth in the R5 class and sixth overall.