Victory at the Barum Czech Rally Zlín went to Jan Kopecký. The ŠKODA Motorsport driver alongside his co-driver Pavel Dresler, the Czech Rally Champion maintaining his 100% season by finishing 55.5 seconds clear of the field after a dominant drive saw him win eleven of the fifteen special stages driven and lead for all but a single stage.

But it was the German Marijan Griebel who had the most to celebrate as his sixth place finish overall and win in the ERC Junior U28 standings meant that he has clinched the ERC Junior U28 title. Griebel, who was competing in a FABIA R5 prepared and run by Baumschlager Rallye & Racing team alongside co-driver Stefan Kopczyk, made a slow start, but put in some impressive times, including three top 3 stage finishes, and made no serious errors to ensure he could not be denied the title.

Three victories in four ERC Junior U28 events is an impressive return for the German, who also made his WRC2 debut earlier this month at the Rallye Deutschland. His reward is a drive in a WRC car in one European event of next year’s FIA World Rally Championship (WRC). 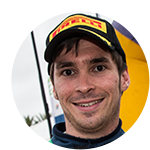 “European Junior U28’s Champion! Fantastic!” said Marijan Griebel afterwards. “Thank you so much to Stefan [Kopczyk], BRR Baumschlager Rallye & Racing, all my sponsors and everyone who has been behind me.”

There were two FABIA R5s on the podium in Zlín after an impressive performance from Roman Kresta / Petr Starý. The five-time former Czech rally champion, who only drives selected events these days, triumphed in a final stage decider against fellow FABIA R5 pairing of Tomáš Kostka / Ladislav Kučera.

Kostka is from Zlín and has a fine record at his home rally, finishing on the podium three times, including a second place last year. But in a FABIA R5 prepared and run by the BRR Baumschlager Rallye & Racing Team, he ended up just three seconds adrift of Kresta, who also happens to be his brother-in-law, after a scintillating final stage which saw Kresta also awarded the Colin McRae Flat Out Trophy for his drive. 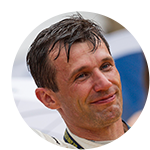 “It was a very, very great race for us and third place is actually an awesome result,” said Roman Kresta at the finish. “I pushed like hell on that final stage and it’s amazing. It’s crazy, I must say that I’m crazy, because I’m too old but I pushed like hell. The car is perfect, the team was great, they prepared very well the car for this event and I am so happy for that.”

Martin Koči / Filip Schovánek brought home their Rallytechnology FABIA R5, which was prepared and run by MM Rally Team, just behind Marijan Griebel in seventh place overall. And one place further back in eighth was the Icari Rally Team car of Pavel Valoušek / Veronika Havelková. The Barum is Valoušek’s home rally and was also a first drive of the season in a FABIA R5 for the reigning Slovak rally champion.

Bruno Magalhães / Hugo Magalhães, who led the ERC standings for much of the season, finished in ninth place at this event. They remain second in the ERC overall standings, but now have a 23-point deficit to overall leader Kajetan Kajetanowicz with just two rounds remaining.

There is still much to compete for in the ERC and the action will resume with the Rally di Roma Capitale which takes place in Italy from 15th to 17th September.

Roger Feghali clinched the Lebanese Rally Championship in his FABIA R5 after victory at the Rally of Lebanon (25th to 27th August) made it three wins out of four rallies of this season, the final two coming in a ŠKODA. It is the thirteenth time he has been crowned national champion and - despite the Rally of Lebanon also being a round of the FIA Middle East Rally Championship (MERC) - his thirteenth victory at this event was never really in doubt.

After finishing third in the opening super special stage, Roger Feghali and his co-driver Joseph Matar took the lead on the second stage and never looked back. The closest challenge came from his brother Abdo Feghali and co-driver Marc Haddad, also driving a FABIA R5, but they lost time due to a puncture on SS6 before a hand injury to the driver forced them into retirement.

The retirement of Nasser Al-Attiyah on Saturday left the way clear for Roger Feghali to cruise to victory and the championship. His eventual margin of victory was just over six minutes with six stage wins to his name as well. In the Lebanese championship, hill climbs also count towards the overall standings. Roger Feghali hasn’t competed in any of these events, but his victories at the Spring Rally, the Cedar’s Rally and here, along with a second place at the Jezzine Rally, ensured that the title is his.

The Toksport WRT FABIA R5 of Gilbert Bannout / Maxime Vilmot finished as runners-up to ensure a one-two win for ŠKODA. They were more than four minutes clear of their closest challengers in what was Bannout’s first ever drive in a FABIA R5.

But the story from the Rally Lebanon was all about Roger Feghali whose dominant victory ensures he is Lebanese rally champion for a record thirteenth time.

Finnish ‘teenage star’ Kalle Rovanperä has retained the Latvian Rally Championship title in his ŠKODA FABIA R5 after finishing first in the Latvian championship standings and third overall at the Lõuna-Eesti Ralli (25th and 26th August). The event, which was the fifth round of both the Latvian and Estonian rally championships, saw Rovanperä paired this time with co-driver Jonne Halttunen in the TGS Worldwide OU FABIA R5. But that didn’t faze him as he set a fast pace throughout, winning a total of five special stages in the rally.

His chances of overall victory took a big blow on the third stage as he suffered a 30-second penalty. This left him in ninth place in the overall standings but didn’t diminish his confidence as he continued to battle at the front of the field with rivals Georg Gross and Egon Kaur. Despite closing the gap considerably, Rovanperä was unable to catch them and ended up 14.9 seconds behind the overall winner Gross and just 7.2 seconds behind Kaur in second place. But the podium finish meant he still won the Latvian standings by a comfortable margin of 1 minute and 26 seconds.

And that result is enough to confirm that - with four victories from five events so far - Kalle Rovanperä will once again be crowned Latvian rally champion this season. Back-to-back titles at the age of just sixteen are an astonishing achievement and underline just what a big talent the young Finn is.

But his season is by no means over. He continues to compete in events in Finland and Italy, while the Latvian championship also has two rounds still to go. The next is the Rally Liepāja which takes place on 7th October.

There was a ŠKODA one-two win at the Rally de Santa Cruz (25th to 27th August) in the FIA CODASUR South American Rally Championship, as Marcos Ligato edged out Gustavo Saba to claim the victory by a margin of just 2 seconds. The Bolivian round of the CODASUR championship is the fourth and penultimate round of the championship and with Paraguayan Saba leading the Argentinian Ligato by just fourteen points in the overall standings going into the rally, it was also going to be an eventful rally.

And so it proved to be as the championship leaders duelled from the starting line to the finish. Ligato and his co-driver Ruben Garcia won two of the opening three stages to open up the smallest of leads. But Saba, who was ably supported by his regular co-driver Fernando Mussano, was never more than ten seconds behind. They exchanged stage victories throughout, but it was SS10 which proved to be crucial. Ligato won by a margin of 6.5 seconds, the biggest of the rally which gave him a 9-second margin in the overall standings. Saba won the next three stages, but Ligato remained hot on his heels each time and they went into the final stage with a difference of just 2.8 seconds between them.

Saba gave it everything he had and won that stage too, but it wasn’t quite enough as Ligato hung onto his coattails to prevail by a margin of just two seconds. Ligato won a total of six of the fourteen stages driven, with Saba claiming the rest, but overall victory went to the Argentinian.

It was a fantastic exhibition of competitive rallying between the two FABIA R5 drivers and leaves the prospect of a mouthwatering final round of the CODASUR championship. That will be at the Rally del Atlántico which takes place from 24th to 26th November. Gustavo Saba will retain the championship lead going into that with 154 points on the board. But with Marcos Ligato now just 1 point behind him on 153, both drivers will be giving their all to claim the CODASUR South American Rally Championship.

At the Rallye Régional des Monts de Vaucluse (26th to 27th August) in the French Cup, there was a victory for Thibault Habouzit / Sandra Fargier who finished 56 seconds clear of their nearest rivals. It was Habouzit’s third French Cup victory and sixth podium finish of the season in his ŠKODA FABIA R5.

And there was more ŠKODA success at another French Cup event, the Rallye National d'Autun - Sud Morvan (25th to 27th August), where Christophe Vaison / Frédéric Deziré finished in second place. It was Vaison’s first ever drive in a FABIA R5 and only his second rally of the season.

In Finland, at the Mänttä 200-Ajo (26th August), Tomi Tukiainen / Mikko Pohjanharju steered their FABIA R5 to victory in what was Tukiainen’s first ever drive in an R5 car.

To Italy and the Rally del Friuli Venezia Giulia (24th to 26th August), which was the fourth round of the Campionato Italiano WRC (CIWRC). Rudy Michelini / Michele Perna finished second in the R5 class and eighth overall in their very first rally in a FABIA R5, which was prepared and run by P.A. Racing. In a close rally, they were just 11 seconds behind the R5 winner and 18 seconds away from fifth place overall. Meanwhile, the DP Autosport pairing of Efrem Bianco / Dino Lamonato finished fourth in the R5 class and eleventh overall, a result which means they retain the lead of their class standings in the championship.