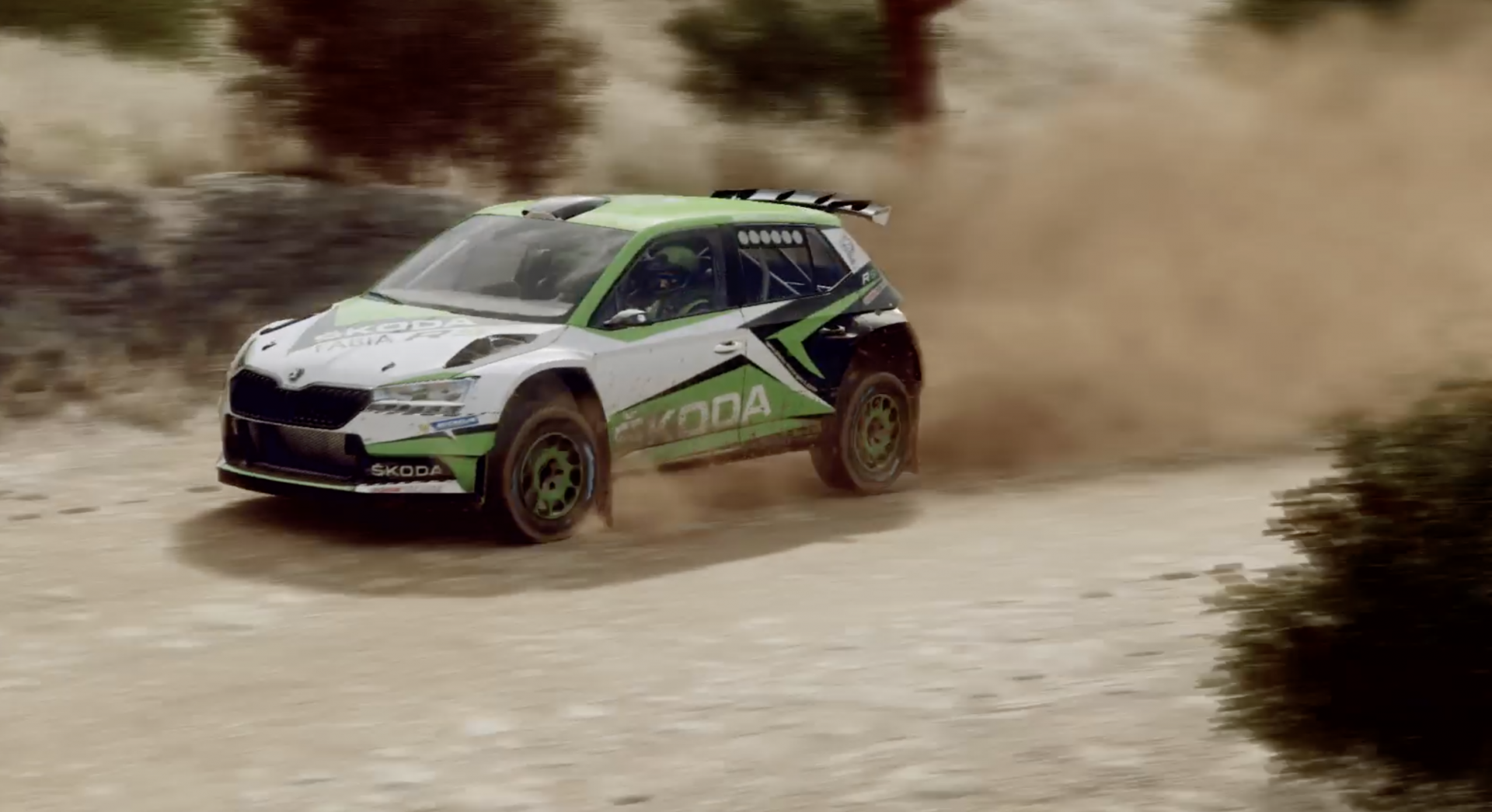 The second round of this year's ŠKODA Motorsport eChallenge will take us to the hot Greek gravel tracks. The challenging courses will test the drivers' ability to combine speed, the ability to keep the car going and handbrake skills.

In Greece you have to drive with your head
Greece's rocky gravel is one of the most challenging surfaces in the World Championship series (WRC), and its depiction in DiRT 2.0 matches the experiences quite well. Only Turkey and Dakar are worse. The key is to keep the proper line and avoid the rocks around the track as much as possible. Here, the drivers will benefit greatly from the legendary durability of the ŠKODA FABIA Rally2 evo. Correct handbrake handling is also an important key to good times. The four stages selected are full of sharp corners and hairpins where you can gain a lot from using the handbrake correctly. Especially on the first one, there is a number of such spots. Players should also watch out for deep cuts through corners that can really throw a race car out of balance, and tricky narrow sections on the hillsides where a too-fast entry or wide exit can mean a crash off a cliff with irreparable damage to the car.

The ŠKODA Motorsport eChallenge will consist of eight stages with a total length of 61.8 kilometres.

Loris Meletopoulos, long-time co-driver and one of the organisers of the Acropolis Rally, offers some tips for driving on the hot Greek stages. Here is an interview with him.

Greece is known for its demanding surface and high temperature, how difficult is it to concentrate in such heat?
The heat is considered as No 1 enemy of the participants of an event such as the Acropolis Rally. With outside temperature of more or less 38-42 degrees, it is well understood that in the sealed cockpit the temperatures rise up to 65-70 degrees. There are ways to fight the heat stroke. One is by getting lots of fluid before- during and after each special stage including minerals and electrolytes and the second extreme one is to use cooling vests under one’s underwear, which work properly but makes the crew’s life a little more difficult every time they enter or leave the car.

Rocky surface of the special stages testing car’s toughness, is it time to avoid the rocks or is the driver simply relying on the durability of the tires?
Nothing to do with the durability of the tires. It is not only the tires that suffer in very rocky and bumpy roads! It is the entire car! The suspension, the transmission even the chassis of the car are also suffering. For this reason, even when someone is participating with a modern WRC car, must respect and avoid the large rocks.

Is it necessary to compromise on speed with regard to the durability of the car during the Acropolis Rally?
Certainly this is the case. A clever crew, when taking their notes must separate the rough parts of every stage and mention on their pace notes to pay special attention on these parts (meaning to drive slower and more carefully) and when the surface becomes smoother to push again on the limit. This is the way to prevent serious damages and to achieve good results, arriving to the finish.

Are there any tricks to be fast in Greece?
Besides what I have described above, there are no magic tricks to be fast in Greece. One has to take advantage of the good parts of each stage (and there are a lot such ones) and to avoid punishing the car on the tough parts. The damages during an event like the Acropolis Rally, are accumulative. You might hit something in one stage and nothing happens, hit something in the following three stages and nothing happens and then hit a very little stone in the stage that follows and the entire car collapses. For this reason you have to avoid heating anything at the first place, being clever enough during recce.

Do local specific conditions require an adjustment of driving style?
This, depends entirely to one’s starting position. In case one starts first on the road (I have done that back in 2006 and 2007) it is a nightmare to deal with the cleaning of the road. In case one starts position No 6-11 he is the lucky guy of the day ! In case one starts after No 20 has to drive in a defense way, following the ditches created by the participants in front.

Do you have any tips for a car setup?
The car must run on the highest height possible, not necessarily very hard bound adjustment and using the best underneath protection available. The tires management is very crucial cause due to the very abrasive surface the tire ware is considered as really high.