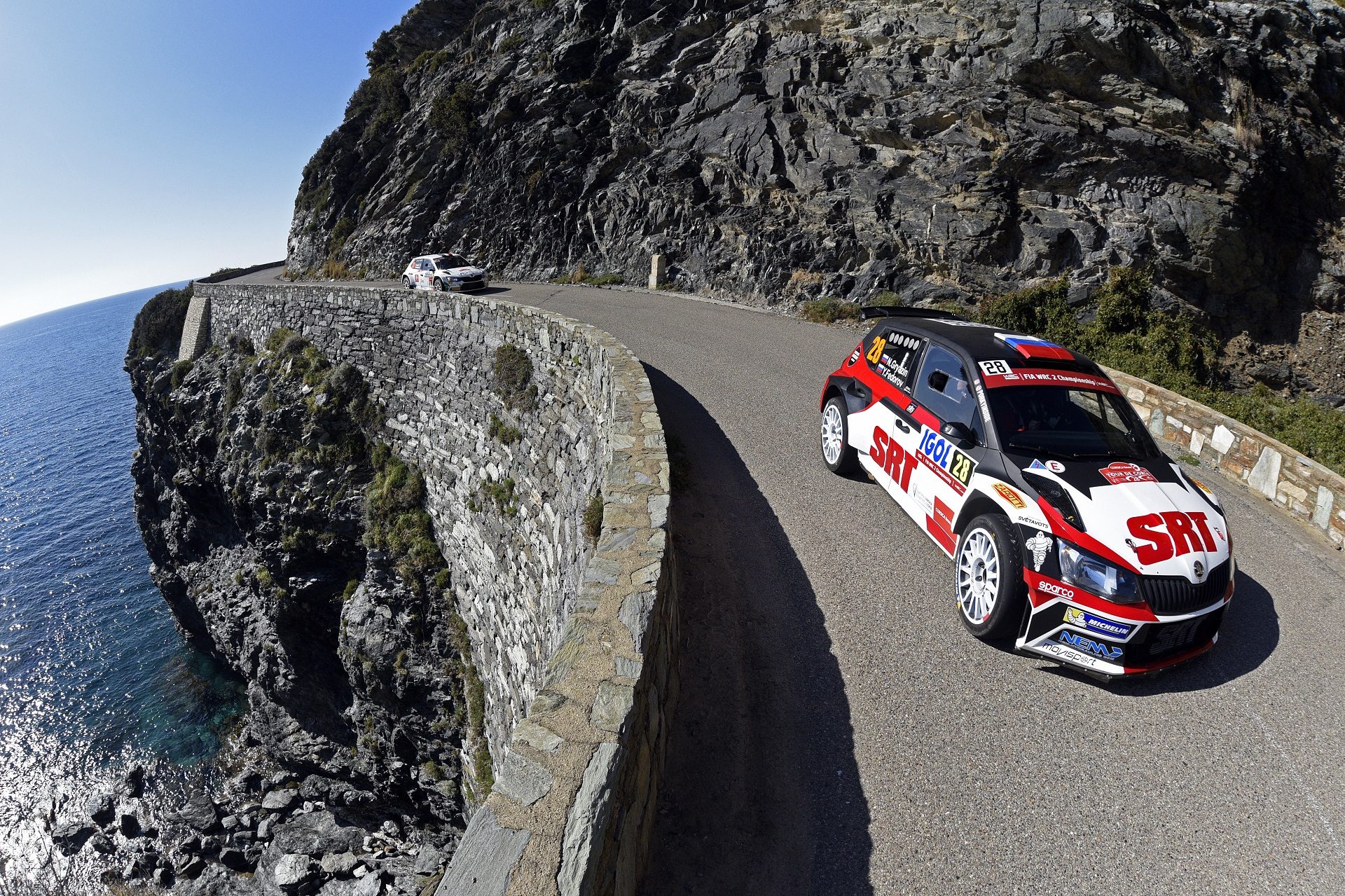 The Rally of 10,000 Corners is on again! Corsica offers stunning sea views and tight, twisty roads, often with cliffs on one side and sheer drops on the other. Precision to the millimetre is a must and the fast pace on tarmac makes for a really thrilling experience. At the same time, Tour de Corse will put the tactical thinking of drivers, co-drivers and their teams to the test. Aggressive tarmac and long stages require being clever with the tyre wear and endless sequences of turns make precise pacenotes an essential thing. Setting the car up is not easy, either, as the stages include sections of varying character, which means that the final setup is much of a compromise.

If you already read our introduction of Tour de Corse, you will find the latest news and results in this article, which will be updated regularly until Sunday.

The 5.39 kilometre long shakedown was the last chance for the crews to test the cars’ setup before the real rally begins. Twisty roads around Sorbo-Ocagnano provided a good taste of sharp switchbacks, series of hairpins and varying tarmac surfaces that are typical for Corsica.

The crew of Kalle Rovanperä and Jonne Halttunen took three runs of the shakedown. After initial time of 4:03.3, Kalle managed to cut another almost six seconds, ending up with the best time of 3:57.3. That was enough for the third place in RC2 and best time in WRC 2 Pro category.

The RC2 classification at Bavella, the first stage of Tour de Corse, was dominated by Volkswagen crews, who claimed four of five first positions. However, the drivers of ŠKODA FABIA R5s were not ready to let go without a fight and managed to get past all the Volkswagens except Eric Camilli in the following stages Valinco and Alta-Rocca. Russian driver Nikolay Gryazin finished the morning in 3rd place, Italian Fabio Andolfi was fourth.

The Finnish crew Kalle Rovanperä – Jonne Halttunen is once again driving a car fielded by a private team, this time MK-Racing. For Rovanperä, it is the first time at Corsica and he is still trying to find the rhythm and pace on the twisty roads. He kept moving around eight place in his class. If he succeeds, he can move up to the first place in the WRC 2 Pro season. At this moment, he is leading the WRC 2 Pro in front of Lukasz Pieniazek.

„It was not really a good day for us so far. The car understeers heavily and we need to find some kind of solution for tomorrow. My driving is getting better, though. It’s a good experience”, said Kalle Rovanperä after first four stages of the rally.

During the Friday’s leg, the drivers faced six stages with no mid-day service, before finally heading to the service park near the Bastia’s airport. Even though he had to fight understeer, Kalle Rovanperä drove flawlessly, while his biggest competitor in WRC 2 Pro, Lukasz Pieniazek, suffered a puncture right in the first stage of the day.

There was no service allowed during the mid-day break after first three stages. Kalle Rovanperä and Jonne Halttunen had no help from their team, but they proved to be quite able mechanics themselves and managed to modify the set-up of their ŠKODA FABIA R5. In the second run of the day’s stages, Kalle’s performance kept getting better. He kept his WRC 2 Pro lead and moved up to 9th position among R5 crews.

“We made some provisional changes of setup and the car is now behaving a bit better, the drive being more pleasant. We’ll see if we can make it even better for tomorrow”, said Kalle. On Saturday, the crews will cover more than half of Tour de Corse’s length in just one day. The longest stage, Castagniccia with more than 47 kilometres in length, will be the highlight of 90-kilometre section without a tyre change.

After two Staruday’s stages, Kalle Rovanperä was confident: “Yesterday didn’t go very well for us, but today, it’s much better. It is not an easy rally, but we are moving up. Last night, we changed the settings during the service and now it’s much better. Now, the most important thing is to gather the pace!”

In the Castagniccia stage, which is longest of the whole rally with its 47 kilometres, he posted some really good split times, but then he went off the track and couldn’t continue. He will return to the competition tomorrow morning to fight for some valuable WRC 2 Pro points.

In the RC2 class, ŠKODA FABIA R5 got into the lead thanks to Fabio Andolfi, who managed to overtake Eric Camilli’s Volkswagen. Nikolay Gryazin, also on FABIA R5, is in the third place.

Unfortunately, the Saturday leg turned out to be the end of Tour de Corse for Kalle Rovanperä. “In the middle part of the longest stage, we made a small mistake, there was some dirt on the road. We went wide and hit a rock. At the first glance, the car was not looking that bad, but unfortunately the roll cage was damaged. It wasn’t possible to fix it at the service so we cannot re-start tomorrow“, explained young Finnish driver.

The biggest rival of ŠKODA FABIA R5 cars, French driver Eric Camilli, had to retire as well due to devastating fire of his Polo GTI R5. The SS12 was then stopped. Italian driver Fabio Andolfi, who helped his competitor fight with the flames, is likely to dominate the RC2 class for the rest of the rally. Nikolay Gryazin in another FABIA R5 now has a chance to secure the second place.

After the Saturday’s retirement of the crew Kalle Rovanperä – Jonne Halttunen from the fight for victory in WRC 2 Pro category, the Sunday was all about the battle of two ŠKODA FABIA R5s in RC2 class. Leading driver Fabia Andolfi lost his almost half-minute lead on Sunday morning and in SS13 Eaux de Zilia, Nikolay Gryazin moved 0.7 seconds ahead of him.

In the final power stage of Calvi, the two fought incredibly close duel. In the end, it was Fabio Andolfi who won the RC2 class at Tour de Corse after very tight race – after almost 350 kilometres of special stages, Gryazin was less than four seconds behind.

“Bad luck for Kalle and Jonne, they paid the greenhorn tax on their first Tour de Corse. Congratulations to Fabio Andolfi and Nikolay Gryazin for their great performance. Both again demonstrated the competiveness of our ŠKODA FABIA R5 and secured a double win in the WRC 2 category for ŠKODA“, emphasized ŠKODA Motorsport boss Michal Hrabánek.