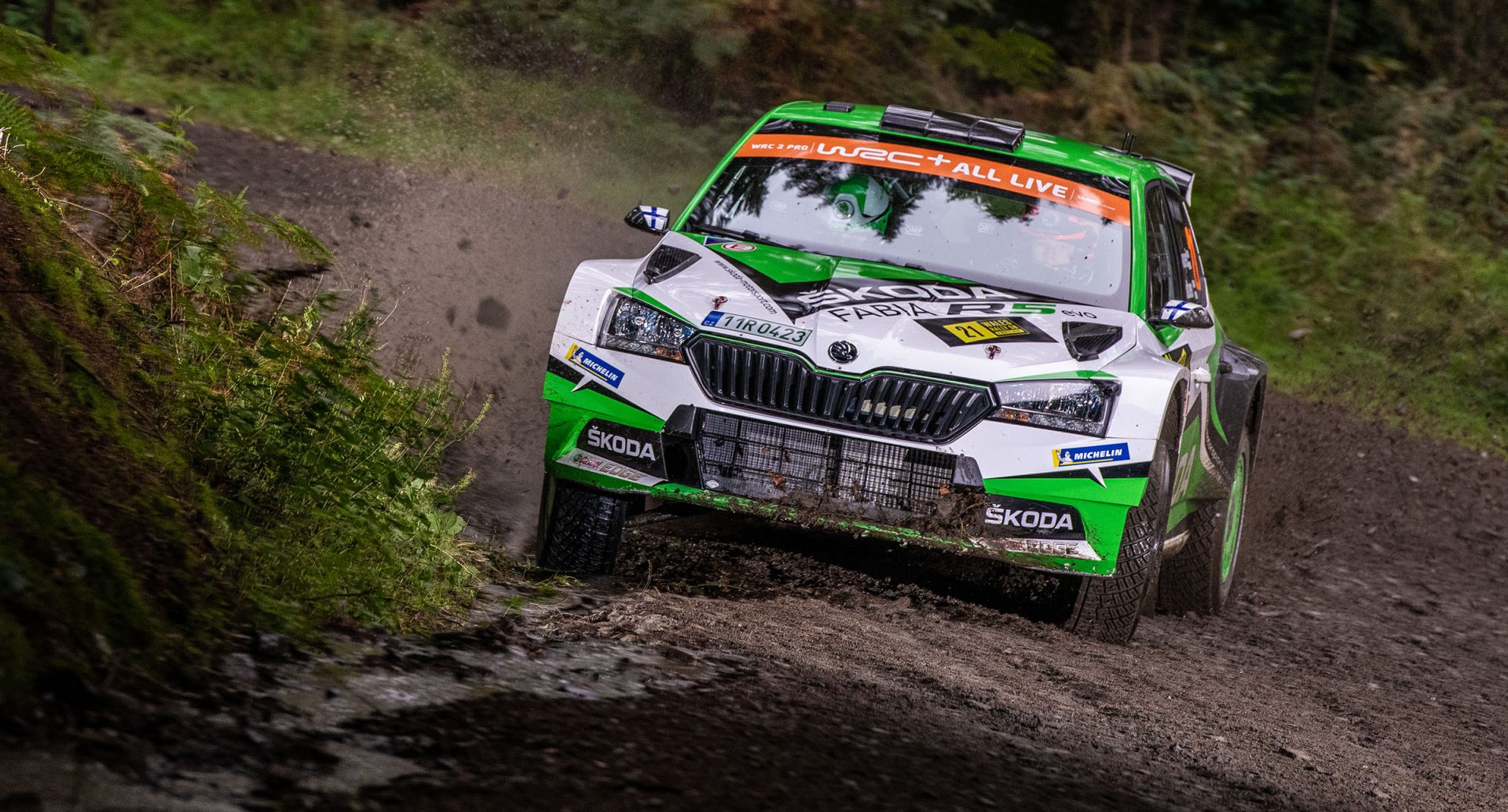 Not even the traditional foul weather didn’t stop the crowds from attending the start of one the oldest WRC rounds in Wales. Once again, the Wales Rally GB was greeted by rain, which brought with itself a combination of slippery tarmac and treacherous mud – on some stages, the cars collect up to 5 percent of its weight in mud.

Not even the traditional foul weather didn’t stop the crowds from attending the start of one the oldest WRC rounds in Wales. Once again, the Wales Rally GB was greeted by rain, which brought with itself a combination of slippery tarmac and treacherous mud – on some stages, the cars collect up to 5 percent of its weight in mud. The engineers have to take this into account when setting up the car, and the crews are trying to remove as much mud as possible between the stages. Read more about the history and challenges of this rally in our detailed preview.

Both ŠKODA Motorsport crews made the most of the Thursday’s shakedown, with both Kalle Rovanperä with co-driver Jonne Halttunen and Jan Kopecký with his new partner Jan Hloušek taking three runs each. The Finnish crew posted the fastest times in its class, being the only car to get under three minutes. Their Czech teammates were just a few seconds slower. However, even more important than times was the opportunity to test the car’s settings and explore the conditions on the stages after the hot runs of rally cars.

The evening’s super special stage in the beautiful environs of the famous Oulton Park circuit offered an attractive spectacle on wet tarmac under the floodlamps. There was also a dramatic ford and a fire show. As the times from the first, short stage usually don’t mean much in the battle for overall victory, all crews focused on not making any mistakes. Kalle Rovanperä posted the fastest time in WRC 2 Pro, finishing 3.5 seconds ahead of Gus Greensmith (Ford Fiesta R5 Mk2), 5.4 seconds ahead of Mads Ostberg (Citroën C3 R5) and 6.3 seconds ahead of Jan Kopecký. In the overall classification of the RC2 class, Rovenperä finished third, roughly two seconds behing Peter Solberg (Volkswagen Polo GTI R5) and Matt Edwards (Hyundai i20 R5).

The first full day of the Wales Rally GB brought a typical British weather with constant rain. Even so, the spectators crowded the stages, where they could watch a thrilling battle between Kalle Rovanperä, Mads Ostberg and Gus Greensmith. ŠKODA Motorsport’s Finnish driver won the first Friday stage, Elsi, while Ostberg and Greensmith came in with exactly same times, 5.2 seconds behind him. In the following stage, Penmachmo, Greensmith managed to beat Rovanperä by 1.3 seconds, while in the finish of Dyfnant stage, it was Ostberg’s turn to celebrate, with Kalle coming in second. After the SS5 Aberhirnant was canceled, Kalle Rovanperä and Jonne Halttunen finished the morning run in the first place of both RC2 and WRC 2 Pro, 6.8 seconds ahead of Ostberg and 28.9 seconds ahead of Greensmith.

Like the morning part, the afternoon portion of Friday’s leg was challenging for the drivers. After heavy rain, the slippery mud was interlaced by huge puddles, making it extremely hard to find the proper line. In the second run of the Elsi stage, Kalle Rovanperä was once again fastest, 1.1 seconds ahead of Greensmith. Unfortunately, Mads Ostberg dropped out from the dramatic battle after an oil leak. Jan Kopecký posted the third best time. The following stage was cancelled after Jari-Matti Latvala’s crash, but the spectators’ mood was lifted again by the beautiful stage Slate Mountain, which takes place in slate quarry. This time, Greensmith was the winner, just 0.6 seconds ahead of the runner-up Rovanperä. Four ŠKODA FABIA R5 evo drivers were in the top five of RC2: Rovanperä, Loubet, Gryazin and Kopecký.

The SS9 Dyfnant turned out to be the decisive one. As the darkness fell, Greensmith didn’t manage to get to the timing control on time and received several-minute penalisation. Kalle and Jonne had their share of troubles as well, when they suffered unexpected puncture of right rear tyre. They decided to carry on, but it cost them their overall lead. With brilliant performance, Jan Kopecký with co-driver Jan Hloušek moved to the lead of both WRC 2 Pro and RC2 class, and they managed to defend their first place in the last Friday’s stage. Finnish crew of Kalle Rovanperä and Jonne Halttunen ended the day in second place, 7.5 seconds behind their Czech teammates. Pierre-Louis Loubet ended up third, followed by Nikolay Gryazin – meaning a 1-2-3-4 finish for FABIA R5 evo in the class!

The toughest day of the whole Wales Rally GB included more than 150 kilometres of special stages, without a single service stop during the day. Even though the rain receded, the tracks stayed wet and the drivers had to be careful judging the grip in every turn. Kalle Rovanperä coped well with the challenge, and returned to the lead right in the first stage, almost 26-kilometre-long Dyfi. As his biggest competitors dropped out of the fight for the lead, he decided to keep a careful pace and enjoy the ride. After another two stages, Myherin and Sweet Lamb, he was leading the RC2 35 seconds ahead of Gryazin and in the WRC 2 Pro, he was minutes ahead of the rest.

In the top places of WRC 2, the leading Pierre-Louis Loubet on ŠKODA FABIA R5 evo fought a close battle with Petter Solberg behind the wheel of a Volkswagen Polo GTI R5. Solberg closed the gap to just 1.5 seconds, but Loubet kept his lead until the mid-day tyre change. Jan Kopecký had a stroke of bad luck with a puncture, which cost him about two minutes. However, he kept his second place in WRC 2 Pro.

Even though Kalle and Jonne decided not to take unnecessary risks, they managed to find and keep great pace on the British mud. They even won three out of four afternoon’s stages, cementing their dominant lead in WRC 2 Pro. They were also in the first place of the RC2 class after the end of Saturday’s leg, 54.8 seconds ahead of Solberg, who managed to get 12.5 seconds ahead of Loubet and took the lead in WRC 2.

The second run of the Sweet Lamb stage was adventurous for Kopecký and Hloušek. Their car got into deep ruts, which sent it into the inner side of the corner and it rolled over after hitting an embankment. However, the ŠKODA FABIA R5 evo once again proved its durability and thanks to the help of spectators, the Czech crew could soon continue, finishing the stage with the loss of less than a minute behind the leading Rovanperä.

On Sunday, the Finnish crew had just one goal – to finish safely and keep the lead. And it’s just what they did. Their only regret could be the cancellation of the beautiful Great Orme stage, winding among the rocks over the seaside. The reason for cancellation were concerns over safety. Of the four Sunday’s stages, Kalle Rovanperä and Jonne Halttunen never won a single one. However, they achieved something much more valuable – they won the Wales Rally GB for ŠKODA Motorsport, and, even more important, they claimed the title of WRC 2 Pro champions for 2019* (*subject to the official publication of the results by FIA). Congratulations to Kalle and Jonne, the youngest world rally champions!

In the RC2 class, six out of the top ten cars were ŠKODA FABIA R5. Besides victorious Rovanperä, they were driven by Jan Kopecký (second in WRC 2 Pro), Pierre-Louis Loubet (second in WRC 2), Nikolay Gryazin, Marco Bulacia Wilkinson and Fabio Andolfi.