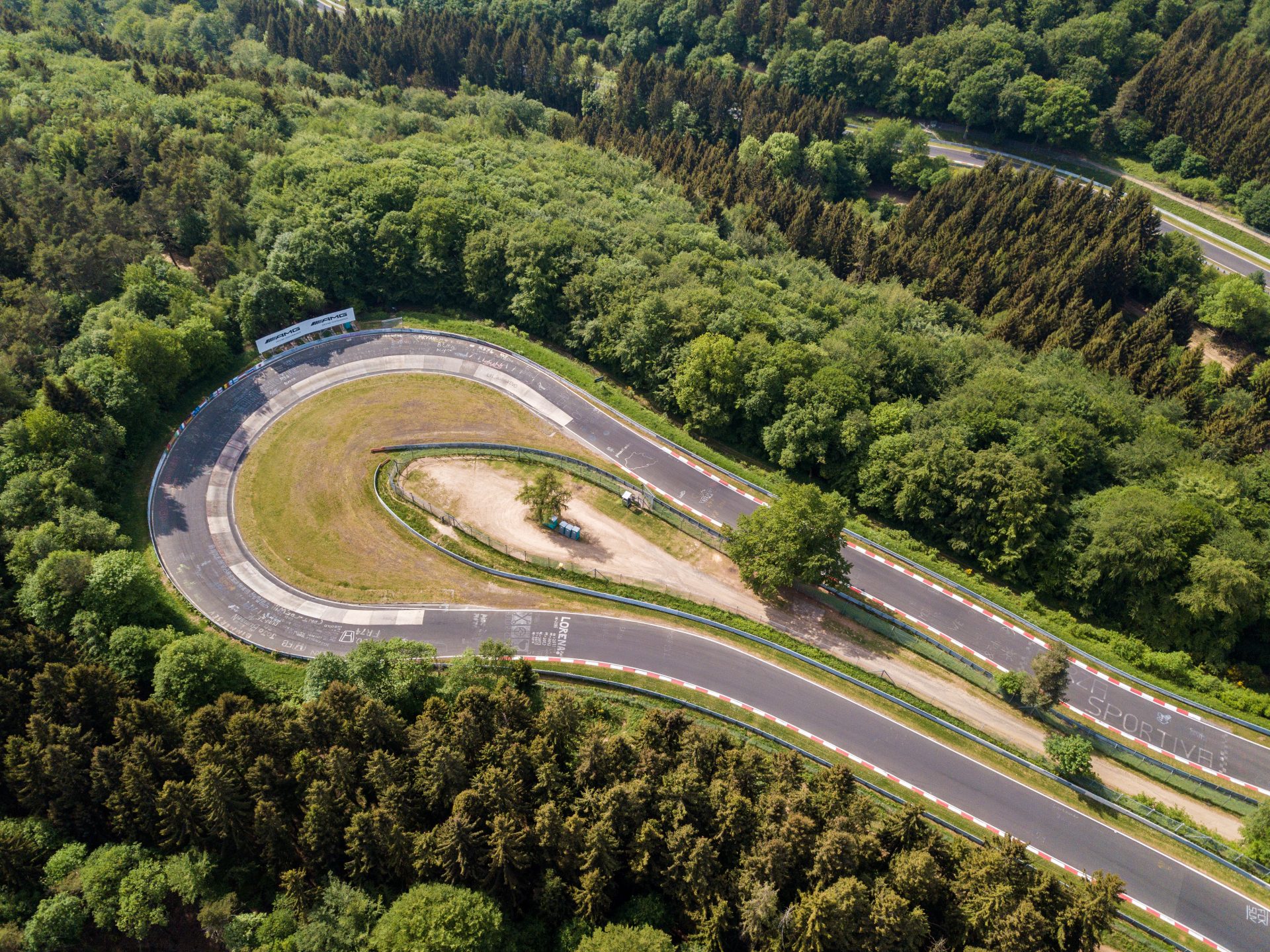 Nürburgring Nordschleife: A Place for Heroes and Records (and KODIAQ RS)

Recently, ŠKODA KODIAQ RS joined great names like Lamborghini Huracán LP 640-4 Performante, Radical SR8 LM, Porsche 918 Spyder or Lamborghini Aventador LP 750-4 Superveloce. Those are the record holders at the toughest racetrack in the world, the unforgiving Nürburging Nordschleife. With local racer Sabine Schmitz behind the wheel, the big ŠKODA grabbed a record – though not an absolute one, just among the seven-seat SUVs. Czech Republic left its third mark in the history of the Green Hell, one much more positive than the second one. So maybe its time to take a look what Nordschleife really is and why it is such a legend.

The racing circuit with well-earned reputation of the toughest track in the world was built by the hands of 3,000 workers between 1925 and 1927. The architect Gustav Eichler designed it – as requested by his client – from the scratch as a closed track that would keep the spirit and tradition of famous open-road circuits like Targa Florio.

At the same time, and that was important for rapidly growin German car industry, it was meant to serve as a proving grounds for domestic car manufacturers. The man behind the whole project of a racetrack in the heart of the Eifel mountains was Dr. Otto Creuz, ADAC (German Car Club) and then mayor of Cologne, later German chancellor, Konrad Adenauer. The cornerstone of the circuit was laind on 27thSeptember 1925 and on 18thJuny 1927, there was already a first race.

The maiden race was a motorcycle one, but on the very next day, an Eifelrennen motor car race was held. Rudolf Caracciola grabbed the win with a supercharged Mercedes-Benz Model S, developed by Ferdinand Porsche. A month later, the first German GP took place on the Nürburgring. Once again, Caracciola was on his way to victory had a mechanical breakdown and the laurels went to Otto Merz with identical car – Mercedes left nothing to chance and fielded four factory Model S racers, enough to take all the podium positions even without Caracciola.

German Grand Prix was held on the narrow, absurdly long circuit until 1976, with a pause between 1939 and 1949. In the final year of the Grand Prix at Nürburgring, Nikki Lauda – then an F1 champion and only man who managed to drive a lap on the Ring under 7 minutes – strongly criticized the safety measures at the track and proposed a boycott of the F1 race at the Nordschleife until the track was modified to improve safety.

Ultimately, though, he wasn’t able to get enough support from other drivers. Most of them voted against the boycott and the race went ahead. In second lap, Lauda’s Ferrari crashed into embankment at 250 km/h and burst into flames. To make things worse, it was hit by another car soon after. Lauda survived thanks to the bravery of other drivers, Arturo Merzario, Guy Edwards, Brett Lunger and Harald Ertl, who, disregarding their own safety, pulled him out of the burning wreck. Even though he suffered severe burns of his face and lungs, as well damage to his lungs and blood from toxic smoke, he was able to enter another Grand Prix 42 days later. In the end, he lost the 1976 title to James Hunt, by just a a single point. Their battle for the victory was immortalized in the movie Rush by Ron Howard in 2013. The German GP was moved to Hockenheimring for the next year and in 1985, it returned to newly built circuit at Nürburgring.

The original track included the North Loop (Norschleife), 22.81 km in length, and South Loop (Südschleife), 7.74 km in length and almost non-existent today, with 2.28 km long Zielschleife (Finish Loop). The longest configuration of the track, called Gesmtstrecke, was unbelievable long at 28.265 km. More than 28 kilometres long racetrack! For some comparison: today’s F1 tracks are usually between three (Monte Carlo, 3,340 m) and six kilometres long. Even the F1 GP track at Nürburgring is just 5,148 metres long. It’s called GP-Strecke and was built in early 1980s, when most unused tracks were demolished. The legendary “Ring”, as the track is now known among the motorsport fans, is today synonymous with Nordschleife.

Although it’s not the longest possible configuration of the track – the one used for endurance racing is 24.433 km long – the Nordschleife is an exceptionally long tack, at 20.832 km. It includes 73 turns – 33 left and 40 right (if we include some gentle curves, the number rises to 165). The extremes do not end there, though. The steepest climb of the Nordschleife is 17 %, while the sharpest decline is 12 %. Such descends require warning sings on public roads… The highest point of the track is Hohe Acht (616.8 metres above sea level) and the lowest is Breidscheid, 320 metres above sea level. That’s elevation of almost 300 metres, on a racetrack. Only on the Ring! For illustration, that’s the height of the Eiffel tower in Paris.

Legally, the Nordschleife is a public toll road. It also means that it’s the longest one-way street in the world. Today, the track is used both for motorsport events, including motorcycle and vintage car races, and for testing by automakers. It hosts sports prototype racing, a touring car championship and endurance races. The prototype racing also brought the absolute record of the track, when Stefan Bellof did a lap in 6 minutes, 11.13 seconds in qualification for 1,000 km endurance race in 1983, driving a Porsche 956C. His average speed was 202.073 km/h. He did another record in the race itself, doing a lap in 6:25.91.

The high point of the season is 24h Nürburgring race. And there’s culture, too. Since 1985, a Rock am Ring megafestival is held at the Nürburgring at the end of May/beginning of June. For motoring fans and petrolheads, though, the most important thing about the ring is that its tarmac is open to public during “Touristenfahrten” or “Tourist drives” which are held traditionally since the track was finished.

Before you go to a “tourist trip” to the Ring, it’s good to know a few things. The basic facts are that you’ll pay 25 EUR for one lap on workdays and 30 EUR on weekend, while the year-round ticket will cost you 1,900 EUR. It’s also good to know that the nickname “Green Hell” was given to Nordschleife by no one else but F1 champion Jackie Stewart. Reasons for the name are both location in forested hills, but also the difficulty, the danger and volatile weather. Jochen Rindt, the only “in memoriam” F1 champion in history (1970) said that “it’s very hard to race on Nürburgring, but very easy to die there”. His fatal crash happened in Imola, but even so, there’s no reason not to believe him. For what it’s worth, the list of the Ring’s victims is worth several thick volumes.

Despite the scary reputation of the track, the adrenaline experiences you can have even with a production sports car, lure tens of thousands drivers each year to try their luck more or less successfully. The less lucky attempts make for hours of YouTube videos – you only need to put something like “Nürburgring Epic Fail Crash Compilation” into YouTube search. If you want to become a star of the YouTube videos yourself, keep in mind a few things. On the Ring, the car insurance does not apply and you will also pay for the damage on the barriers, the tow service and the time the track is closed because of your crash. And you will pay on the spot, in cash. There are no discounts of “student prices” under the Nürburg castle.

And the other Czech marks on the Ring we mentioned earlier? The first was left by legendary Czech racer Eliška Junková, who won her class of the Germany GP in 1927, driving a Bugatti Tipo 35. The second one is much sadder and also connected to Junek family. On 15thJuly 1928, Čeněk Junek, husband of Eliška Junková, died here after a crash with another Bugatti Tipo 35B. He was the first racer to lose his life on the circuit. Unfotunately, he was far from the last. So let’s just be glad that the fight for motorsport safety was fruitful and today, both track racing and rallying is much safer and fatal accidents are rare exceptions, not the rule.