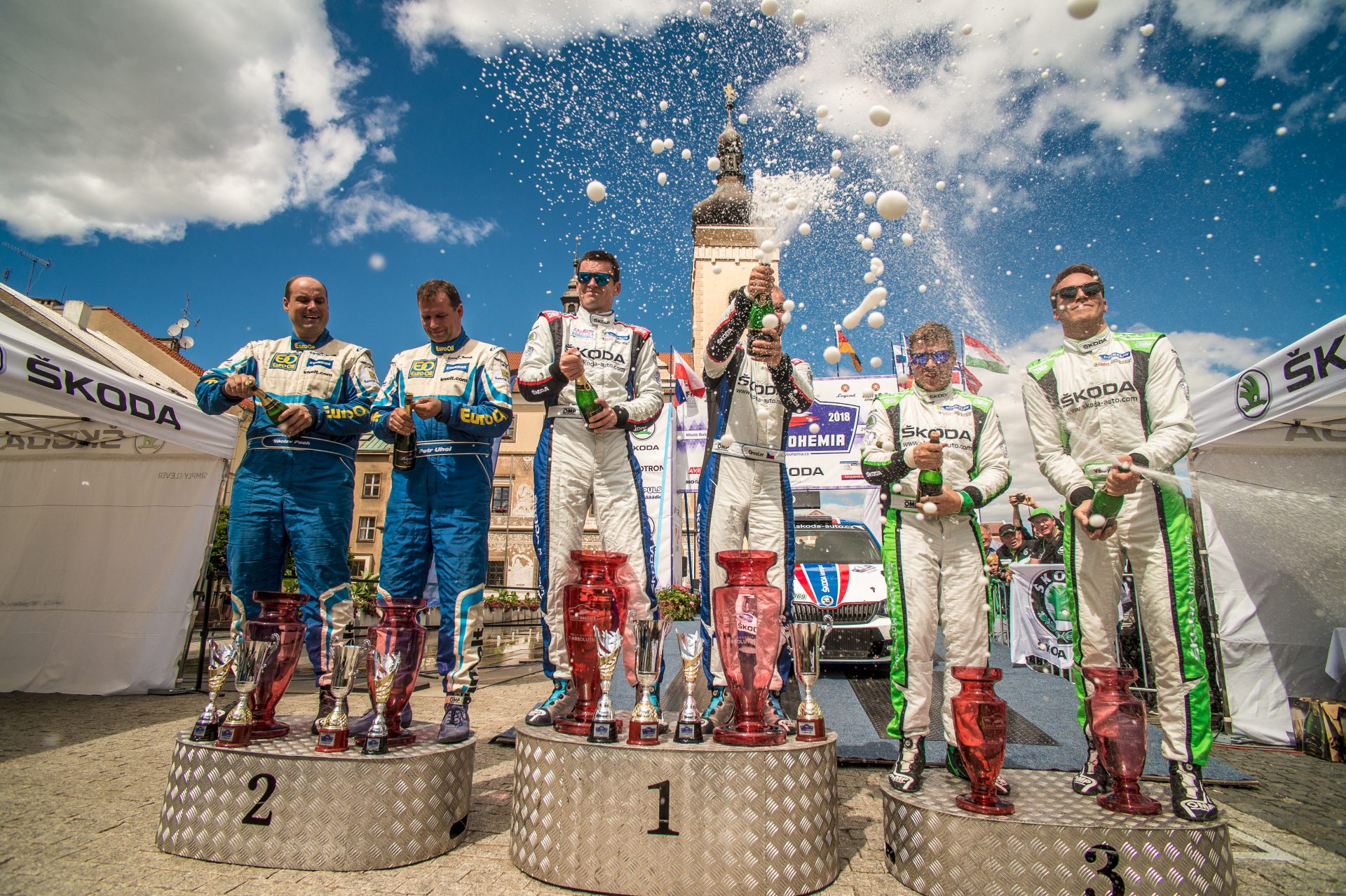 With two rallies to go in the Czech Rally Championship calendar, Jan Kopecký and Pavel Dresler already secured their title at the “home field” of Rally Bohemia, which took place in and around the ŠKODA hometown of Mladá Boleslav.

Rally Bohemia is one of the most challenging events of the Czech Rally championship – and it takes place just outside the factory gates of ŠKODA Auto in Mladá Boleslav. Ten thousand ŠKODA employees came to watch the rally and cheer for the impressive and rarely seen line-up of three factory crews. The works cars are accompanied by another nine private FABIA R5s, putting the total number to a dozen. Also representing the brand are three ŠKODA FABIA S2000s.

While Jan Kopecký with his co-driver Pavel Dresler, driving a FABIA R5 in Czech national colours of red, blue and white, are on the mission to secure their fifth national title early, their young colleagues from Scandinavia, Ole Christian Veiby/Stig Rune Skjaermœn (NOR/NOR) and Juuso Nordgren/Tapio Suominen (FIN/FIN) are here with the task to gain more experience on tarmac and finish the rally safely.

In front of ten thousands of enthousiastic Czech Rally Fans, Jan Kopecký set his first fastest time on a street circuit in the heart of Mladá Boleslav. He constantly pulled away from his competitors, set all fastest times on the four stages of the morning loop and it was obvious that he was not only going for the title win, he intended to continue his winning streak with his ŠKODA FABIA R5. Since the debut win in April 2015 at Rally Šumava Klatovy, Jan Kopecký achieved victory number 21 in Czech Rally Championship.  O.C. Veiby, like Juuso Nordgren, followed the team orders to play it safe and gain experience. Due to their cautious approach, they were on seventh and tenth position, respectively, after the morning stages.

In the afternoon run, Jan Kopecký managed to win three of the five stages and kept himself in the lead, 19.7 seconds ahead of Václav Pech junior on Ford Fiesta R5. The youngsters kept their pace, with Juuso Nordgren staying at the 10th place and O. C. Veiby improving from seventh to sixth.

Of the private FABIA R5s, Filip Mareš and Vojtěch Štajf are keeping the fastest pace and occupy 4th and 5th positions, behind the two Fords and ahead of O.C.

On Sunday morning, Veiby moved to fifth position after a second fastest time on stage eleven, and he even had the podium in sight. At the penultimate stage, he was again second fastest and at the end, he moved with the fastest time on the last stage to the third place on the podium, while Nordgren finished his mission to build up his tarmac experience on the challenging Czech special stages in eight position.

“It was pure pleasure to drive my ŠKODA FABIA R5 and to win in front of so many ŠKODA employees. I have to thank the whole team for giving me such a fantastic car, which allowed me to secure my sixth national title”, emphasized Jan Kopecký, who received the first congratulations on the finish ramp in Mladá Boleslav from Christian Strube, Head of Technical Development of ŠKODA AUTO.

ŠKODA Motorsport boss Michal Hrabánek concluded: “Jan and Pavel rewarded themselves with another convincing title win. This success also is a well deserved reward for the whole ŠKODA team. On top of that, they have the chance to win the title in the WRC 2 category of the FIA World Rally Championship in the coming months. But before thinking so far ahead, it is time to celebrate now. Our youngsters O.C. Veiby/Stig Rune Skjaermœn and Juuso Nordgren/Tapio Suominen perfectly followed team orders, delivered a disciplined performance and collected valuable experience on tarmac.”