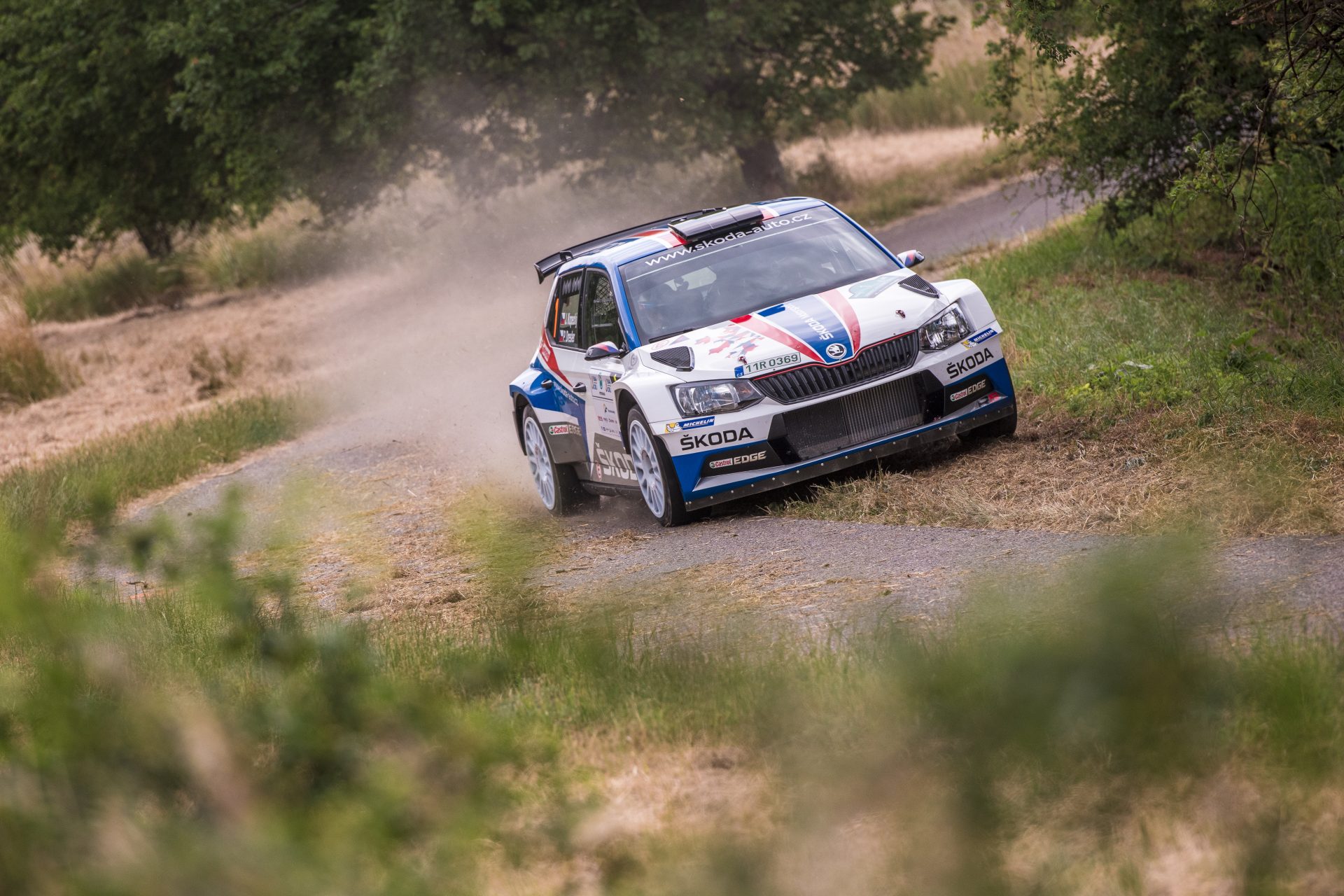 The flowing hills and lush vineyards of Southern Moravia are echoing with the roar of rally cars today – and will be for another day. After the first three stages of the Rally Hustopeče, crews and their cars retreated to service area to prepare for another batch of three stages, which is on the evening’s menu.

Once again, Jan Kopecký with his tricoloured works FABIA R5 asserted a total domination of the rally. After clear victories in all three stages, he is almost 20 seconds ahead of the runner-up, Polish driver Grzegorz Grzyb on another FABIA R5.  And they are not alone – 7 out of 10 leading cars are FABIA R5s.

The evening stages were a reprise of the afternoon ones, just with added darkness. And for Jan Kopecký, they also meant a reprise of his domination. He won all three stages and this time, he was joined by another three FABIA R5s at the top. Behind Grzegorz Grzyb from Poland in the second place, local rally driver Filip Mareš and Slovakian Martin Koči ended up 3rd and 4th, completing the 1-2-3-4 finish for the FABIA R5s at the end of the first leg.

On Saturday, Jan Kopecký and Pavel Dresler continued to drive their own rally, with the competition fighting for the second place. Still, the works crew faltered a little, placing 3rd in the SS9. Other than that, they kept clean record, winning all stages.

Behind them, a tense battle for second place ensued between ŠKODA privateers Martin Koči and Filip Mareš. In the end, it was Koči who secured the silver, while Mareš ended up losing some time and ending in 4th position. Overall, eight out of ten leading crews at Rally Hustopeče drove FABIA R5s.

“After my victory on gravel at Rally Sardinia, it was a pure pleasure to drive my ŠKODA FABIA R5 on tarmac again. Now I am looking forward to Rally Bohemia which will take place close to the ŠKODA factory in Mladá Boleslav”, Kopecký was already looking ahead. The reigning Czech Champions will be joined at Rally Bohemia by their teammates, ŠKODA juniors Ole Christian Veiby/Stig Rune Skjaermœn (NOR/NOR) and Juuso Nordgren/Tapio Suominen (FIN/FIN), who will make their second appearance in the Czech Rally Championship.

ŠKODA Motorsport boss Michal Hrabánek concluded: “Jan and Pavel continued their 2018 winning streak in an impressive way. They can crown themselves champions again in front of our ŠKODA employees at Rally Bohemia in Mladá Boleslav. On top of that, they will have the equal chance like their teammates to fight for the title in the WRC 2 category of the World Rally Championship.”