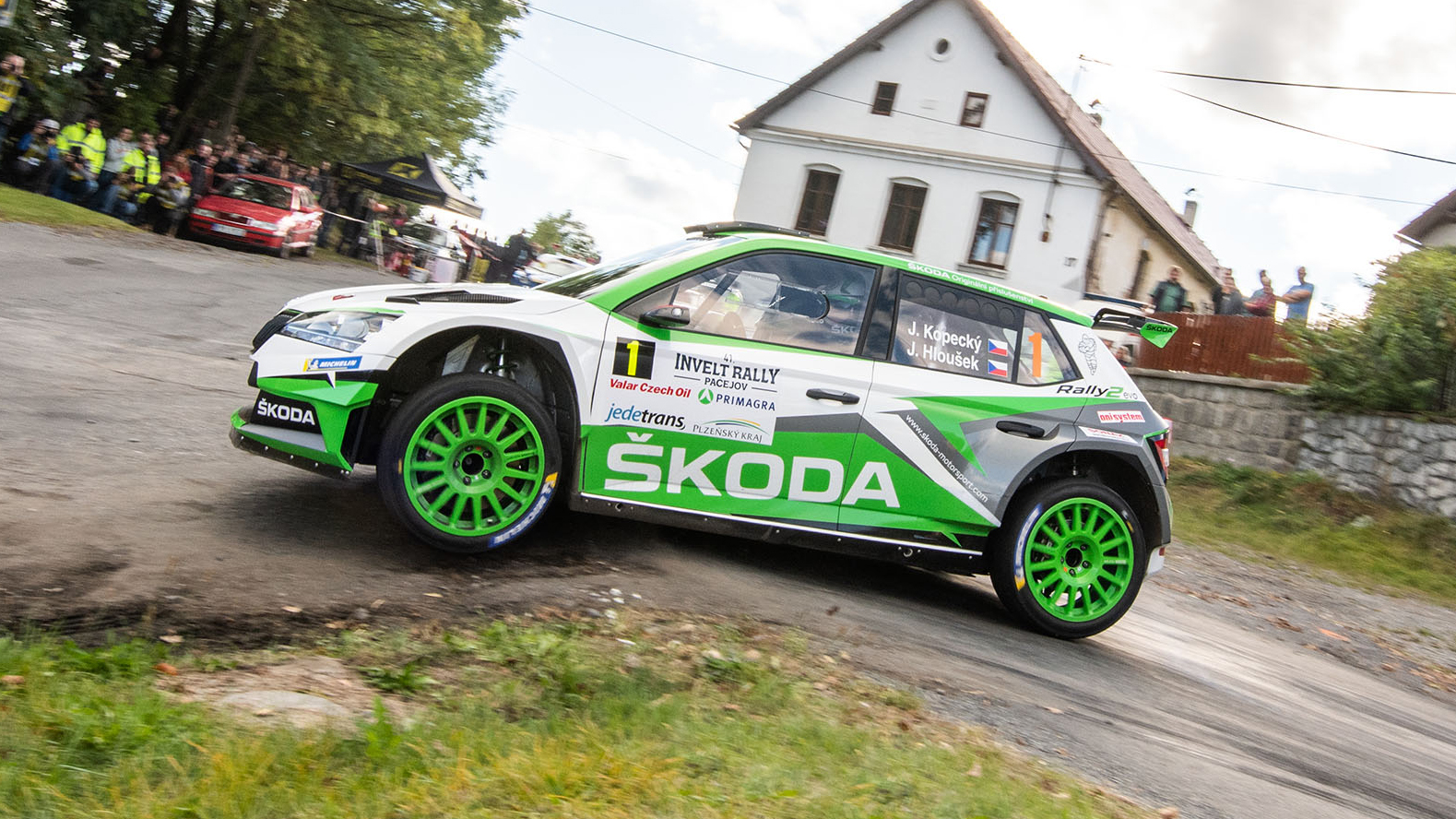 This year’s Czech Rally Championship brings riveting battles for the podium positions, and its third event, premiering Rally Pačejov, was no exception. Once again, the multiple Czech champions are fighting for the victory – ŠKODA Motorsport factory driver Jan Kopecký, driving a ŠKODA FABIA Rally2 evo with Jan Hloušek on his side, and Václav Pech junior with Petr Uhel in Ford Focus RS WRC. However, the situation is no less interesting down the standings.

Taking advantage of a national holiday, Rally Pačejov takes place unusually on Sunday and Monday. On Sunday morning, the crews were greeted by low temperatures, wet tracks and mud on the roads. During the day, the weather improved, the stages started to dry out and finally, even the sun appeared.

The difficult conditions were better suited to Jan Kopecký. While on both Valašská rallye and Rally Bohemia it was Pech who took the lead right away and managed to defend it up until the finish, in Pačejov, Kopecký and Hloušek won a whopping seven out of eight Sunday’s stages. Gradually, they built a 35.4-second lead – and almost 20 seconds of it right in the first two stages.

“We went all-out into it, the same way as the last time on Valašská rallye. However, the conditions were quite a bit different this time. The special stages here are beautiful and very fast. In Pačejov, there’s always a lot going on – horizons, fast sweeping curves… it’s really interesting and very attractive rally,” commented Kopecký on the first leg of the rally.

Spectators weren’t let down by Filip Mareš and Radovan Bucha on another FABIA Rally2 evo, either. Once again, they fought for the third place with Jan Černý and Petr Černohorský on Volkswagen Polo GTI Rally2. In the first three stages, Černý was faster and managed to build a lead of 10 seconds ahead of Mareš. The latter, however, started to speed up constantly and he closed the gap second by second. In the last five stages of the Sunday leg, he managed reduce Černý’s lead to three seconds.

The results of Rally Pačejov will be decided on Monday’s leg – and the unpredictable weather will sure play its part.

The second day of the Rally Pačejov once again greeted the crews with low temperatures just above zero and light but persistent rain. Jan Kopecký and Jan Hloušek confirmed that they don’t mind such conditions or unknown tracks of a new rally. They won all three of morning’s stages and increased their lead to 53.7 seconds. Filip Mareš posted two second and one third best time, enough to move him ahead of Jan Černý and three stages before the finish, he was in the third place more than 17 second ahead of the fourth. Unfortunately, he later had to retire due to miscalculation that lead to him running out of fuel. Even such things happen in rallying.

The ŠKODA Motorport factory crew remained in control of the rest of the rally. In the two stages, it finished second in one (right behind the lead) and first in the other. This was enough for Jan Kopecký and Jan Hloušek to become winners of Rally Pačejov 2020, more than 1 minute ahead of Václav Pech and Petr Uhel in the second place.

“It was a lovely drive. Rally Pačejov is, for sure, the hardest rally of the championship, but it’s really beautiful. The weather was difficult as well, but I had a lot of confidence on the wet. I hope that the final round in Šumava will take place, as it promises a thrilling battler with Václav Pech for the title,” concluded Kopecký.