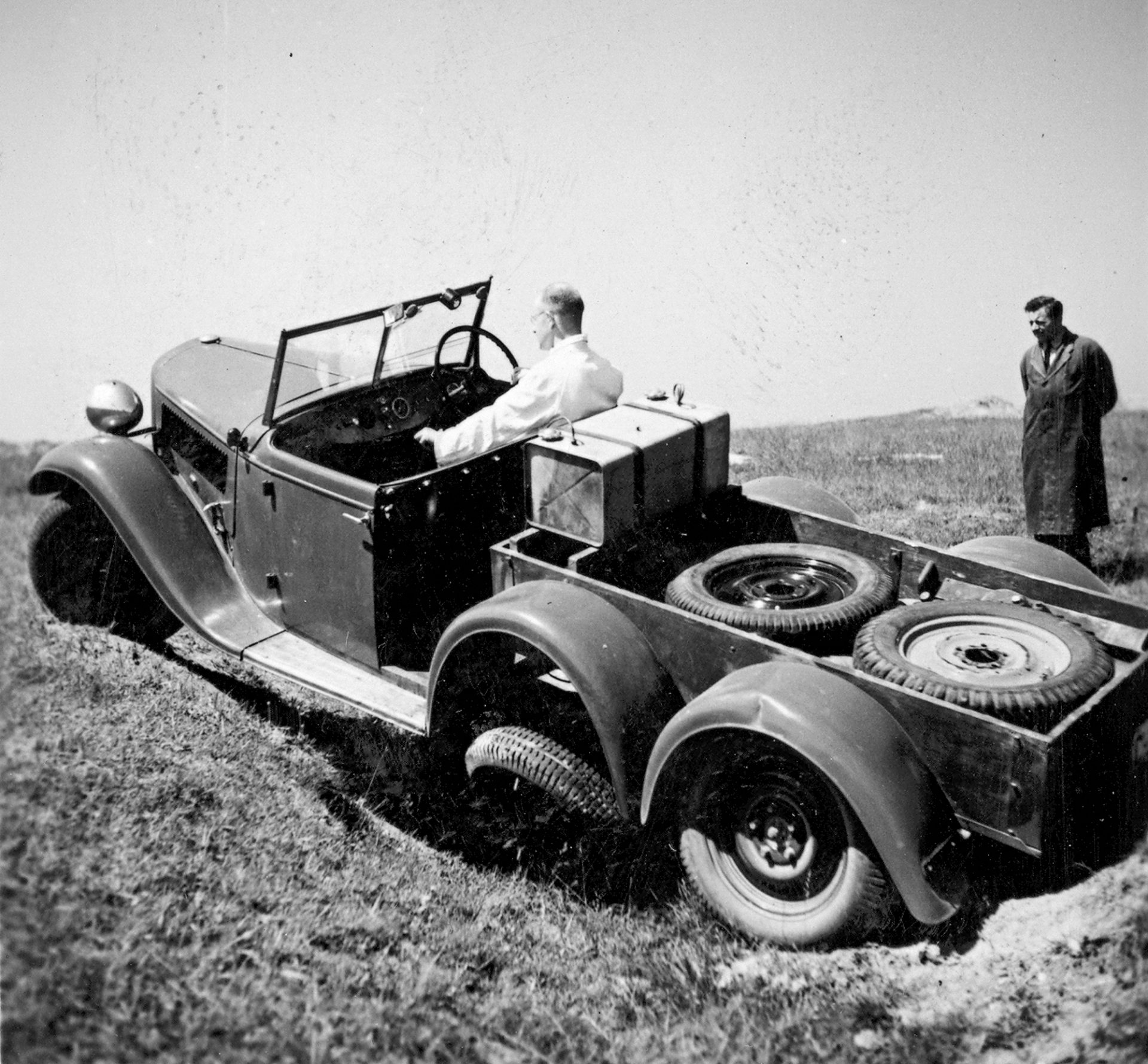 Twice the Traction, a Hundred Times More Problems: A Brief History of 4×4, Part One

The obvious advantages of transferring the power to all four wheels have been enticing engineers since the early days of the automobile. Building a functional, durable and most of all reliable all-wheel-drive system is not easy, however, so it’s taken some time for the 4×4 to proliferate. Although it was first attempted at the turn of 19th and 20th century, the first proper all-wheel-drive cars did not appear until the 1960s. The mass proliferation of four-by-fours, with almost every automaker offering one, is a thing of recent times. As with most automotive innovations, there were two branches of development which led to this point – motorsport and army research.

The main advantage of the 4×4 system is so apparent that even the very first automotive developers noticed it. They soon found out that driving more axles in a way that won’t cause the cogs to jump out and away from the machine at the first opportunity was not at all easy. Not to mention that you would probably want the car to be able to traverse unpaved roads as well as paved ones, that it needed to be able to turn and, the most outrageous expectations of them all, that the car should be able to achieve speeds above walking pace and that the drivetrain should not weigh twice as much as the rest of the car.

It’s probably no surprise therefore that, at a time when it was difficult enough to solve basic problems like the steering itself, effective braking or the preparation of fuel and air mixture, the four wheel drive remained in the “nice to have” category, with the priority set to “sometimes, maybe”.

Still, the chance of doubling the traction by putting the second axle to work gave many engineers sleepless nights. Many systems were experimented with, including many quite bizarre ones, as well as a lot of futuristic ideas that are only now coming back into fashion. In military vehicles, more than one driven axle soon became quite common, although they still weren’t really all-wheel-drives.

It was typical for an all-terrain truck to have two driven axles in the back and one steered one in the front. It makes sense – the 6×4 doesn’t need to solve half of the engineering problems of the 4×4. This approach was successfully employed by ŠKODA, with its 903 model (displayed at the top of this article), based on the civilian limousine SUPERB and introduced in 1936 as a 6×4 off-road vehicle.

On both sides of the Iron Curtain, the 4×4 was long limited to special applications and a very few specifically designed cars. Only in the 1980s did the Volkswagen Group, or, to be more specific, Audi, start entertaining the thought that the 4×4 might also be useful for normal drivers, outside of rough terrain. Also, that it might have some advantages in rallying.

It still isn’t clear who engineered the first all-wheel-drive vehicle. If we are talking about the overall first, it would probably be the French automaker Latil, who built cars with a front (!) full-time driven axle and part-time rear drive. To call these vehicles “cars”, though, would be a little misleading. Although they were wheeled vehicles with internal combustion engines, they were what was then called “tractors” – designed to tow artillery pieces and move heavy loads in rough terrain.

It is widely thought that the first real 4×4 car was made by Spyker, an automaker from Trompenburg near Amsterdam in the Netherlands. The company introduced the 60HP 4WD model in 1903 – driven by an in-line six-cylinder with a displacement of 8.7 litres. This racing car, designed by Belgian engineer Joseph Valentin Laviolette (the beautiful Spyker C8 Laviolette from 2000 was named after him), was meant to race in the Paris – Peking rally. In the end, it wasn’t used, due to financial reasons and because of some unsolved technical problems.

The car wasn’t just the first internal-combustion, all-wheel-drive car. It also used the first spark-ignited six-cylinder engine and it was the first to use brakes on all four wheels. The expensive development and poor sales eventually led to Spyker’s bankruptcy – the first, but certainly not the last. Bankruptcy became a sort of a tradition for Spyker. It’s not always easy for technological innovators.

Some, though, were coping much better. The next in line for the title of the 4×4’s creator is Ferdinand Porsche. In 1900, he designed an all-wheel-drive vehicle, although not yet under his own name – he w,as working for Austrian truck maker Jacob Lohner. Just 25 years old Porsche found an elegant solution to such pesky problems as the need to use three differentials or many driveshafts and half-shafts. At a time when it wasn’t yet clear if electricity or internal combustion would become the go-to power source for the next 100 years, he decided to “solve” the problem by putting four electric motors into the wheel hubs.

It was soon realised that the electric car’s range was not nearly sufficient. Porsche once again found an elegant solution to the problem that the electric car industry is working hard to solve even today. He added an internal combustion engine which recharged batteries, which in turn powered the electric motors. In a way, he built the first ever 4×4 hybrid vehicle, something that is actually considered quite new these days.

In the first decade of the 20th century, another company started making all-wheel-drive vehicles. Caldwel-Vale from Australia built trucks which had, not just all-wheel-drive, but also four wheel steering. On the other hand, these machines did not use tyres, instead rolling on massive steel rims. Daimler-Benz was another maker to introduce several 4x4s, with some of them even having all-wheel-steering, from 1903 onwards. These, however, were all specially developed military all-terrain trucks and artillery towing vehicles. The first Daimler personal off-road car, called Dernburg-Wagen, was introduced in 1907 and it also had both axles driven and steerable.

In 1908, all-wheel-drives made it to America, when immigrants Zachov and Besserdich founded the Four Wheel Drive Auto Co. near the city of Oshkosh, after which the company was later named. Their products are considered to be the first mass-produced all-wheel-drive cars in the world and were used in both the American and British military during World War I – and they continue to be so, under the same name, to this day.

During World War I, the development of military 4×4 vehicles obviously accelerated, but almost without exception, they were huge, single-purpose vehicles. Not much changed in the inter-war period. Even though several companies (Nash, Marmon-Herrington, Dodge) were interested in developing all-wheel-drives, the customers were still mostly military. The interesting exceptions are the civilian-looking (although developed for military use), jointly-developed Mercedes-Benz G6 and BMW 325 4×4. They used three locking differentials, fully independent suspension on all wheels and four-wheel-steering. Some of their engineering solutions can still be found on the Mercedes-Benz Unimog and, to some extent, also on the Mercedes G-class.

Another interesting take on the four-wheel-drive system was invented in the 1920s by Citroën, which replaced the rear axle with tracks. The half-track system took on and during the World War II, it became immensely popular on both sides of the conflict. Citroën took its half-tracks through the Sahara in 1922 and re-created Marco Polo’s travels in early 1930s. In Soviet Russia, the four-wheel-drive was introduced with the GAZ-61, which was created in 1938 by mounting the body of the M2 personal car on a massive new chassis with a 4×4 system. In a way, it was one of the first “civilian” 4x4s in the world. Most of them, however, were still military green, and it was the army officers who enjoyed the ability to climb 38-degree hills and wade through 72 centimetres of water. The civilian versions were quite rare, their existence partly owed to the fact that the secret police needed to look “civilian”.

Another interesting figure in the 4×4’s development is Harlond Arminius Miller, an American engineer, who built cars and engines for the Indy 500 in the 1920s and 1930s. His cars took 9 victories in the Indy, his engines another three, and there were many more victories in other races. Miller built the first front-wheel-drive racecar (the Miller 122 FWD – a 2.0-litre, four-cylinder with hemispherical heads and a supercharger, producing up to 235 horswepower), and he also developed the first 4×4 racecar.

Miller was a technical genius, but his finances were in constant disarray. He made friends with another engineering revolutionary, Preston Tucker (who ended up paying for Miller’s funeral) and along with many other innovations, they co-developed the Tucker Combat Car. Naturally, it used an advanced and cleverly engineered 4×4 drive, plus a unique gun turret. While both nearly went broke because of it, it inspired the famous Jeep Willys in many ways – mostly when it comes to suspension components and the 4×4 drive. The turret system then made its way into the B-17 and B-29 bombers.

During World War II, four-wheel-drive cars were produced on an unprecedented scale. More than 1.5 million were made in North America alone and, through Lend-Lease agreements, they went all around the world. Still, the first implementation of the all-wheel-drive into more compact vehicles presented itself as problematic even during the war. Americans were (also thanks to Tucker and Miller) the first to be successful, which resulted in the famous Jeep. The first 2,700 examples, known as Bantam 4x4s, were followed by more than 700,000 lightweight, universal 4×4 vehicles made by Ford and Willys-Overland.

The USSR first used Jeeps and then developed its own GAZ 64 and GAZ 67. In Germany, the standard light military car was the Kübelwagen, based on the KdF-Wagen, which later became the VW Beetle. The Porsche-designed car had a rear-mounted engine and rear-wheel-drive. At the very end of war, the first Jeep CJ-2A appeared in the USA and right after that, the first Land Rover Series I was introduced in Britain. These two models heralded the first real breakthrough by 4×4 cars into the civilian market. There was still a long way to go, though, as all-wheel-drive vehicles were still considered utilitarian and their use as ordinary street-driven cars was still far away.