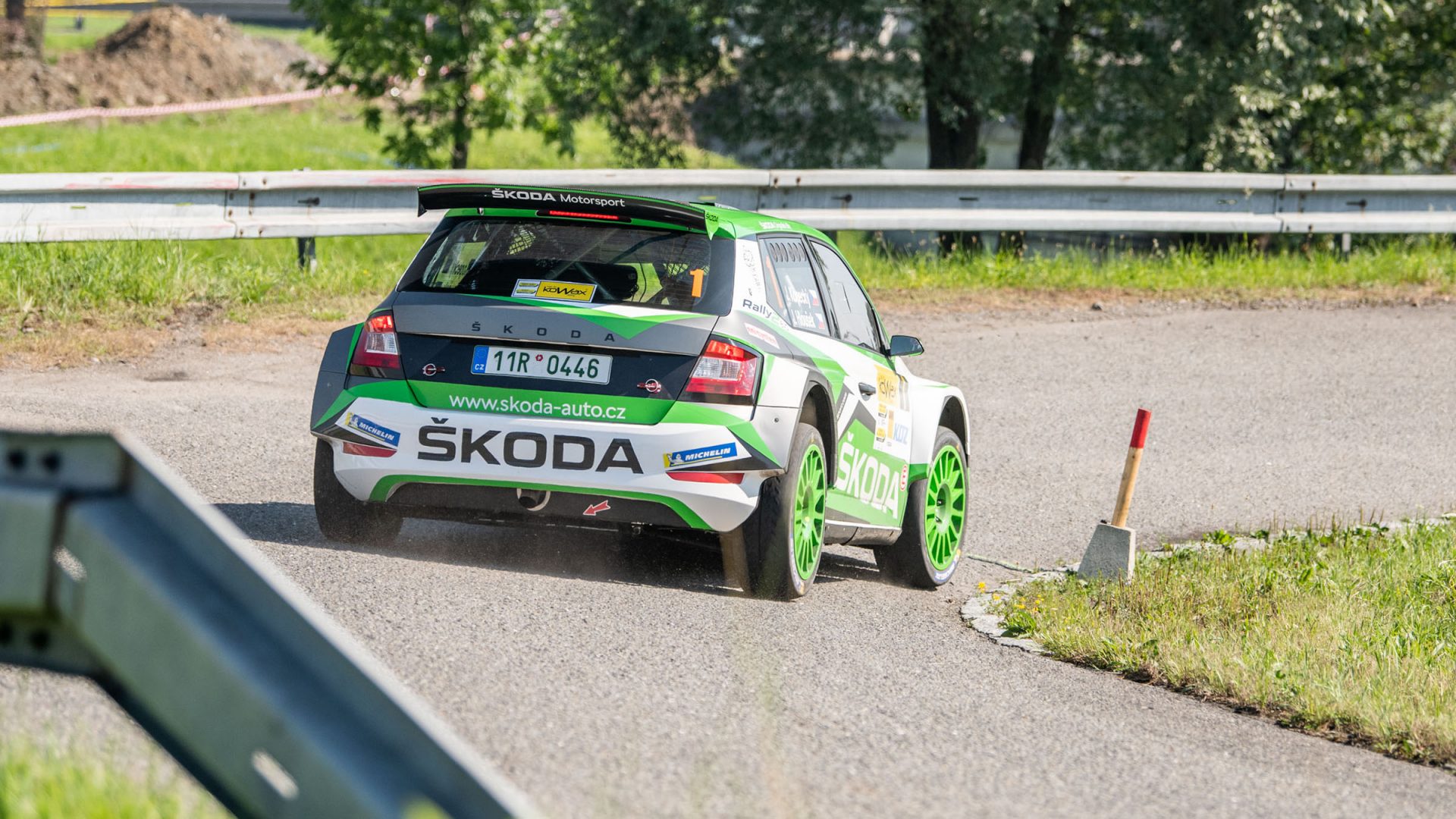 The second round of the Czech Rally Championship follows after the dramatic Rally Bohemia, which brought tight battles for tenths of a second and driving on a knife’s edge. Like in the first round, the ŠKODA Motorsport factory crew of Jan Kopecký and Jan Hloušek will fight for the victory, and there are also several customer crews with great ambitions.

In this article, you will find the latest information about the times of the fastest drivers, photos from the event and results of the crews fighting for podium positions in their ŠKODA cars.

Right from the first hot kilometres, the expectation that Jan Kopecký with his ŠKODA FABIA Rally2 evo and Václav Pech junior behind the wheel of a powerful Ford Focus RS WRC will be the top contenders for the victory. Pech won Fulnek, the first stage of the Saturday’s leg, 1.1 seconds ahead of Kopecký, on the Lešná stage, it was Kopecký who was 0.2 seconds faster. At Bystřička, they both posted the identical time, down to a tenth of a second. In the end, Pech finished the Saturday afternoon a few seconds ahead of Kopecký.

After the first part of the leg, seven ŠKODA FABIA Rally2 and Rally2 evo crews were in the top 10. Besides Kopecký and Hloušek, the duo Filip Mareš – Radovan Bucha was the fastest, and Miroslav Jakeš and Petr Machů finished in fifth. Others in the top ten were Petr Semerád, Albert von Thurn und Taxis, Jan Jelínek and Karel Trojan junior.

The only thing that changed in the afternoon was that the heat increased and the crews were really sweating under the hot sun – and the temperatures of over 30 °C really tested the cars as well. Even so, the competition in the second runs wasn’t any less intense and Kopecký didn’t let his biggest rival to increase his lead any more. Pech won the first stage by 1.3 seconds, but in the second one, the ŠKODA Motorsport factory crew was whole 4 seconds faster. At Bystřička, the draw almost repeated – but this time, Kopecký was a tenth of a second faster. This shrunk the difference between the first and second car to just 1.4 seconds. In the Saturday’s last stage, the gap increased a bit once again and the factory crew Kopecký – Hloušek finished the Saturday’s leg losing 4.3 seconds to the lead.

Right behind Kopecký and Pech, Filip Mareš with another ŠKODA FABIA Rally2 evo was posting steady times. He was third fastest three times during Saturday’s afternoon, and once he was fourth. This was enough to move him from the fourth place overall to third.

Sunday: At the same pace

The struggle for the podium positions provided a great show for spectators even on Sunday morning. Right in the first stage, Choryně, Jan Černý with Volkswagen Polo GTI Rally2 managed to close the less-than-a-second lead of Filip Mareš driving a ŠKODA FABIA Rally2 evo. At the time, both competitors were in a shared third place with the time exact to a tenth of a second. In the following stages, it was Mareš who had a reason to celebrate as he was in the bronze position, 2.5 seconds ahead of his rival, at the time of the mid-day service.

Jan Kopecký and Václav Pech also kept a quick pace in the battle for first and second place. The ŠKODA Motorsport factory crew was clearly the fastest of all the Rally2 cars and four stages before the finish, it was almost a minute ahead of the field. At the same time, Václav Pech with his Focus WRC was leading by 9.7 seconds. There were also five more ŠKODA FABIA Rally2 crews in the top ten – Miroslav Jakeš, Petr Semerád, Albert von Thurn und Taxis, Jan Jelínek and Karel Trojan junior.

The second part of the Sunday’s leg did not change the standings and the crews leading the field defended their positions, even though Kopecký managed to cut Pech’s 10-second lead in half. Fastest among the Rally2 crews were Jan Kopecký with Jan Hloušek (2nd place overall) and Fililp Mareš with Radovan Bucha (3rd place overall), both driving a ŠKODA FABIA Rally2 evo. ŠKODA cars took seven places in the top ten, thanks to the performance of Miroslav Jakeš, Petr Semerád, Albert von Thurn und Taxis, Jan Jelínek and Robert Adolf.

After winning 7 out of 15 stages, Kopecký was satisfied with his performance: “Looking back at our drive, I can’t say that we could do anything better. The car worked great as well and we didn’t have a single problem. I’m really glad that the ValMez rally could take place even at the time of the pandemics and that the organizers found a way to have it, for which they deserve great thanks. Some stages were beautiful, especially the forest stages Lešná and Bystřička were absolutely marvellous.”